In the morning of the 99th Anniversary of the Republic of Estonia, on 24 February at 7.33 a.m., the flag hoisting ceremony will be held in the Governor’s Garden next to Toompea Castle.

“Starting the Independence Day with the hoisting of our blue-black-white flag has become so close to the heart of the people over the years that there is no longer room for us in the courtyard of Toompea Castle. Therefore I invite everybody to the flag hoisting ceremony in the Governor’s Garden, where you will get a much better view of the flag rising on the Tall Hermann Tower,” President of the Riigikogu (Parliament of Estonia) Eiki Nestor said.

Flag hoisting ceremony has been held in the courtyard of Toompea Castle for the last 17 years (2000–2016). Before that, it was held in the Governor’s Garden, next to Toompea Castle, for 11 years (1989–1999), and this year the ceremony will again be conducted there.

The ceremony starts at 7.33 a.m. with hoisting of the blue, black and white national flag while the national anthem of the Republic of Estonia is performed. After that, President of the Riigikogu Eiki Nestor will make a speech. Archbishop of the Estonian Evangelical Lutheran Church Urmas Viilma will say the words of blessing.

Student of the Drama School of the Estonian Academy of Music and Theatre, winner of Voldemar Panso Prize Teele Pärn will read the Estonian Declaration of Independence.

Come and join us! 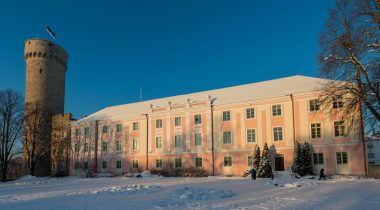