Participants of the NATO Parliamentary Assembly conference, which was held in Brussels yesterday, before the NATO Summit, confirmed the unity of the Alliance.

Head of the Estonian delegation Marko Mihkelson considers the meeting before the Summit an excellent opportunity to exchange ideas with the speakers and also with colleagues from the Allied countries.

“It is not possible to predict the exact course of events at this Summit, but it is important to understand that support for the multilateral world order and general trust in NATO continue to be strong,” Mihkelson said. “The mutual understanding prevailing between the members of NATO PA is a proof of that.”

Mihkelson said that at its two last Summits in Wales and Warsaw, NATO had adopted several significant decisions that increased the security of the whole Alliance and created a good basis for a successful Summit.

At the conference held in Brussels yesterday, Deputy Secretary General of NATO Rose Gottemoeller emphasised the importance of increasing the readiness of troops, military mobility, more equal sharing of expenses, and the cooperation between the European Union and NATO. The Deputy Secretary General underlined that the parliamentarians of NATO member states had an important role in increasing the awareness of the functioning and the principles of the Alliance.

Mihkelson said that the NATO PA conference devoted much attention to the present state of transatlantic relations. United States Deputy Assistant Secretary of State for European and Eurasian Affairs Michael Murphy, who introduced the positions of the current US administration, also spoke of several issues that had been mentioned by Gottemoeller. Besides that, Murphy emphasised the importance of continuing the fight against terrorism. Murphy admitted that there had been differences of opinion between the USA and NATO Allies in Europe also earlier. He was of the opinion that the unity of the Alliance would endure and the current different opinions in some issues would be overcome.

One of the speakers at the conference was Minister of Foreign Affairs of Estonia Sven Mikser, former long-time member of the Estonian Delegation to NATO PA. He recalled that contributing of at least two percent of GDP to defence spending had been on the agenda during the terms of office of three last US presidents. Mikser said that NATO’s open door policy had to become more credible, and concrete steps had to be taken to achieve this.

This afternoon NATO PA President Paolo Alli will address NATO Heads of State and Government to present the views of the Assembly on the key issues affecting the Alliance. 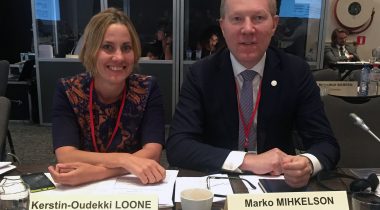