Members of the Riigikogu (Parliament of Estonia) Eerik-Niiles Kross, Indrek Saar and Raivo Tamm participate in the Summer Session of the Parliamentary Assembly of the Council of Europe (PACE) in Strasbourg this week. Key items on the agenda include strengthening the decision-making processes, and the issue of Russia’s credentials and voting right.

Member of the Estonian delegation Eerik-Niiles Kross said that, at its Summer Session, PACE focused on a possible amendment of the decision-making processes of the Assembly relating to the credentials and votings of the delegations of member states. “The key item on the agenda is essentially the restoration of the voting right of Russia. Developments that would totally eliminate the possibility to restrict the voting rights of delegations would significantly weaken the authority of PACE, would give an extremely negative signal to the defenders of human rights around the globe and would absurdly be a real prize for Russia,” Kross added.

The topics on the agenda of the PACE Summer Session also include Daphne Caruana Galizia’s assassination and the rule of law in Malta, combating of violence against women and achieving gender equality, ending of violence against children, and the statement by the United Nations Special Rapporteur on the sale and sexual exploitation of children.

The Assembly will also discuss the situation in Syria, post-monitoring dialogue with Bulgaria, the murder of Boris Nemtsov, and the budget of PACE.

Pace is the oldest international parliamentary assembly in Europe that held its opening session on 10 August 1949. The task of the Council of Europe is to protect the fundamental values of its member states: human rights, the principle of the rule of law, and democracy. 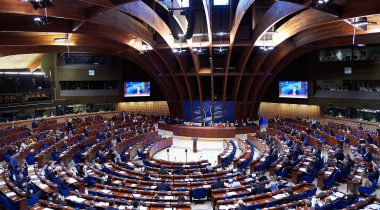