Today Head of the Estonian Delegation to the Parliamentary Assembly of the Council of Europe Marianne Mikko emphasised in Strasbourg at the debate of the Plenary Session which was concerned with the mass harassment of women near Cologne Cathedral on New year's Night that gender equality is a human right.

An urgent debate titled “Recent attacks against women in European cities – the need for a comprehensive response” was held at the Plenary Session of the PACE today. In the speech given there, Mikko referred to Secretary General of the Council of Europe Thorbjørn Jagland, who said that in a state based on the rule of law, nobody can be above the laws. “Let the cultures and religions be as different as they can, we have to respect our fellow humans. To put it directly – to respect human rights,” Mikko said.

In Mikko’s opinion, the events in Cologne are a sign of the cultural difference of the refugees and the frustration of young men in getting a home, job and bread on the table. “This is a debate on understanding and condemning, and also a dilemma of how much we have to follow the voice of the heart and how much the voice of reason,” Mikko said.

In connection with the Cologne incident, Mikko drew attention to the need for honesty and openness, because over time it has become clear that harassment of women in public places had taken place all over Europe last year. She considered it right to criticise media and police whose mouths had been shut.

Mikko considers it extremely important that in states based on the rule of law there are no institutions which deal with suppressing information or making facts more beautiful. “No matter how inconvenient a fact is, it should be spoken about and must be spoken about,” Mikko said. “Only an honest diagnosis makes it possible to overcome the disease. In the same way as it makes no sense to cure cancer with aspirin, it is of no use to fight flu with chemotherapy.”

In her speech Mikko also said that according to the mythology of Ancient Greece, Europe was a woman. “A man with another cultural background and religion must know that Europe is not a whore. Europe is a lady who is worthy of full respect. From all of us,” Mikko said.

Mikko expressed her regret that of the 47 member states of the Council of Europe, only 39 have signed the Istanbul Convention and only 19 have ratified it.

Estonia as the next holder of the Chairmanship of the Committee of Ministers of the Council of Europe has set gender equality as one of its three priorities. According to Mikko, it is a challenging role also for Estonia itself because in order to be honest in front of women and Europe, Estonia has to ratify the Istanbul Convention.

Estonia will hold the Chairmanship of the Committee of Ministers of the Council of Europe from May to November in 2016, and our three priorities are the rights of children, gender equality and human rights and the rule of law in the Internet. 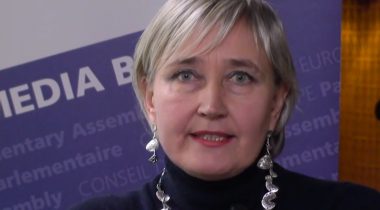