President of the European Commission Jean-Claude Juncker, who spoke at the plenary session of the Parliamentary Assembly of the Council of Europe (PACE) in Strasbourg, focused in his address on the mitigation of the migration crisis and the relations of the European Union and Turkey.

Head of the Estonian delegation to the PACE Marianne Mikko said that Jean-Claude Juncker’s wish to resolve the migration crisis deserved recognition. “The agreement between the EU and Turkey is good, but not without rocks. Meeting the criteria for visa liberalisation should not be dawdled over; the conditions have to be fulfilled 100 percent.” Mikko remarked.

Keeping in mind the EU-Turkey agreement, Mikko asked Juncker what would happen if Turkey did not fulfil the criteria that were obligatory for visa liberalisation with the EU. “Unfortunately the President of the European Commission did not give a straight answer, and it remains unclear whether granting Turkey visa liberalisation is decided, or it is still too early to open the cards,” Mikko said.

In the opinion of the member of the Estonian delegation to the PACE Jaak Madison, Juncker did not give any specific plan that would help Europe get out of the crisis and could be an action plan for Europe. “Juncker’s address was noncommittal and very slogan-like. The positions presented by him are already exhausted in Europe by now, and it was of very little use for taking specific measures,” Madison said.

Prime Minster of Turkey Ahmet Davutoğlu also spoke about the relations of the European Union and Turkey at the PACE session today.

Intellectual property rights in the Internet, women’s political representation, situation of people during the war in Ukraine, terrorist acts in Brussels, the Panama Papers and other issues will also be discussed at the session of the PACE in Brussels this week.

Marianne Mikko, Jaak Madison, Andres Herkel and Raivo Aeg are members of the Estonian delegation to the PACE at this Spring session of the PACE. 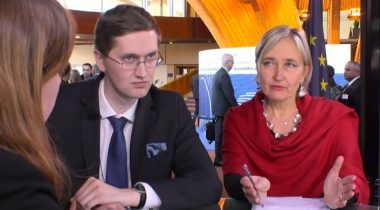