At the memorial ceremony of the June deportation, President of the Riigikogu (Parliament of Estonia) Eiki Nestor laid a wreath in the memory of the victims of deportation at the Victory Monument to the War of Independence. The Riigikogu started its today’s sitting with a moment of silence.

“Today 76 years ago, under the cover of the darkness of the night, the Soviet occupants and their henchmen banged on the doors of houses and flats to catch 10,000 people in their sleep and send them far away from their homeland in cattle wagons. 6000 of them never returned,” the President of the Riigikogu said at the commemoration evening yesterday at Käru.

According to Nestor, even the most inhuman regimes try to leave an impression, at least seemingly, that the punishing of people has been carried out according to some kind of laws. “In the events that took place in June – there the Communist dictatorship did not even try to leave such an impression,” Nestor said. “The resolution passed by the Communist brutes in May in Moscow spoke of removing the socially hostile element, deporting them. This is a concept that the law does not recognise. This shows the regime’s extreme hostility towards the people.”

“In a free country, where we live now, we do not label anyone, we do not tell people that they are wrong, different. We do not hate them or punish them. Today we live in a free society,” Nestor said.

During the night before 14 June 1941, mass deportation took place in Estonia. Soviet repressive authorities took more than 10,000 people to Siberia. 6,000 children, women and men died of hunger and exhaustion, or were executed. On the Day of Mourning today, all victims of repressions are commemorated.

Photos of the memorial ceremony of the June deportation. 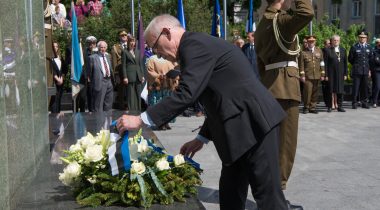