Sunday, 4 June is the 133rd anniversary of the national flag of Estonia. On that day, everybody is invited to the flag hoisting ceremony in the Governor’s Garden at Toompea. It will also be possible to visit the Tall Hermann Tower, to see from close up the national flag that symbolises our independence, and enjoy the view of Tallinn from the tower.

The Board of the Riigikogu and the Estonian Flag Association invite everybody to the solemn hoisting of the flag of Estonia at 7 a.m. in the Governor’s Garden at Toompea, at the foot of the Tall Hermann Tower.

The flag will be hoisted at the Tall Hermann Tower by the representatives of the Estonian School in Stockholm, Jakob Westholm Gymnasium and Tallinn Co-education Gymnasium. During the hoisting of the flag, the national anthem of the Republic of Estonia is performed.

President of the Riigikogu Eiki Nestor and Chairman of the Estonian Flag Association Jüri Trei will speak at the ceremony. Archbishop of the Estonian Evangelical Lutheran Church Urmas Viilma will say the words of blessing.

The flag hoisting ceremony in the Governor’s Garden will be attended by the honour guards of the Defence League, Women’s Home Defence, Young Eagles, Home Daughters, Scouts, Guides and academic organisations, as well as the flag hoisting units of societies, associations and schools.

The orchestra of the Defence Forces will play and the choirs of the Estonian Female Song Society will sing at the ceremony. The choirs will perform “Hoia, Jumal, Eestit” (”God Protect Estonia”, music by Juhan Aavik, words by Aleksander Leopold Raudkepp) and “Eesti lipp” (“Flag of Estonia”, music by Enn Võrk, words by Martin Lipp).

Programme of the ceremony: 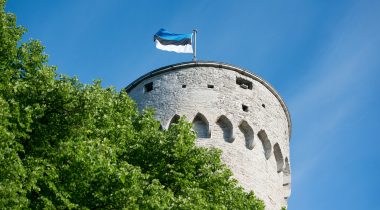