The meeting of the Parliamentary Assembly of the Union for the Mediterranean in Vienna at the beginning of this week focused on finding sustainable solutions to the environment problems concerning the Mediterranean region, but the refugee crisis and the role of local governments in it became the main issue for discussion.

Member of the Riigikogu (Parliament of Estonia) Imre Sooäär said in his speech that Estonia wishes to contribute constructively to solving of the refugee crisis, and emphasised that the economic possibilities of countries and their number of population should be taken into account.

“Let us make efforts to establish, through the cooperation of civil society organisations, local governments and countries, such horizontal cooperation networks that would be able to provide new solutions to satisfying the basic needs of the refugees and de-escalating the crisis,” Sooäär said.

“The refugee crisis is not only a problem of the governments, but a problem for the whole society, and the involvement of citizens associations may lead to new solutions,” Sooäär said. He admitted that the assistance structures of states often do not function in problematic regions and war regions. 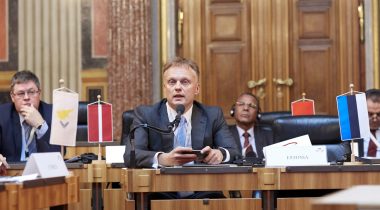