Today, the members of the Riigikogu (Parliament of Estonia) elected the Board of the Estonian Group of the Inter-Parliamentary Union (IPU), which consists of President Toomas Kivimägi and Vice-Presidents Marika Tuus-Laul, Helmen Kütt and Helle-Moonika Helme.

The main aims of the activities of the Inter-Parliamentary Union (IPU) are to promote cooperation between parliaments and members of parliament, to participate in the processes of ensuring global peace and security, to protect human rights and to develop representative democracy. Estonia was a member of the Union in 1921–1940 and restored its membership after regaining independence in 1991.

All members of the Riigikogu belong to the Estonian IPU Group, and elect the board of the group. The Board, which includes the President, who received the most votes from the plenary assembly, and three Vice-Presidents, constitutes the Riigikogu delegation to the IPU.

The aim of the activities of the delegation is to develop inter-parliamentary relations, and to introduce in international forums the Estonian state and the positions of our state on topical issues. 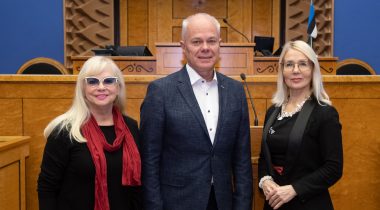