On the Estonian Flag Day, the pupils of Noarootsi Gymnasium, Riga Estonian Basic School and Tallinn School No. 21 hoisted the flag at the Tall Hermann Tower. President of the Riigikogu (Parliament of Estonia) Eiki Nestor, Bishop of the Estonian Evangelical Lutheran Church Einar Soone and Chairman of the Estonian Flag Association Jüri Trei spoke at the event.

“The most solemn work today was done by schoolchildren, the flag of Estonia is proudly waving on the Tall Hermann Tower to the glory and joy of us all,” said the President of the Riigikogu Eiki Nestor at the solemn flag hoisting ceremony. “Today we should also think of those who do much more than others to keep the traditions of our flag, and thank those who preserve the Estonian language and spirit in the wide world.”

The Estonian Evangelical Lutheran Church, who organises Tartu Sacred Song Festival this summer, and Noarootsi Gymnasium were given traditional hand-carried flags by the Estonian Flag Association.

Today, on the 131st anniversary of the flag of Estonia, all who wish can visit the Tall Hermann Tower from 11 a.m. to 4 p.m.

Photos of the flag hoisting ceremony 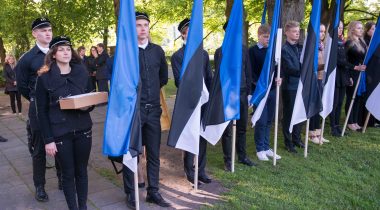