Today and tomorrow the delegation of the Riigikogu (Parliament of Estonia) attends the Interparliamentary Conference for the Common Foreign and Security Policy and the Common Security and Defence Policy (CFSP/CSDP) in Malta. High Representative of the European Union for Foreign Affairs and Security Policy Federica Mogherini also participates in the Conference.

At the Conference, which is organised by the present holder of the Presidency of the Council of the European Union Malta, the state of play of the European Neighbourhood Policy, and the prevailing situation in the Southern Mediterranean and Middle East regions will be discussed. Fighting propaganda and information warfare, mitigation of refugee crisis and the EU-NATO relations will be spoken about in the workshops.

Chairman of the Foreign Affairs Committee of the Riigikogu Marko Mihkelson said that recent events in the world had brought into the focus of discussions the effectiveness of hybrid warfare, where information and cyber weapons had been mixed among typical means of ar.

Mihkelson noted that every day attempts were made to destabilise political forces with contradictory messages and one-sided interpretation of history. Therefore it is especially important in his opinion that the European Union respected fundamental rights and freedom, including freedom of speech and independence of the media.

Chairman of the National Defence Committee Hannes Hanso pointed out as a matter of concern that between 2005 and 2015, the spending on national defence in European countries had decreased by nearly 11 percent. He said that this mistake was already being corrected, but not all countries had lifted the level of defence spending sufficiently yet.

The next Conference for the Common Foreign and Security Policy and the Common Security and Defence Policy (CFSP/CSDP) will be held in Tallinn on 7–9 September during the Estonian Presidency of the Council of European Union, and the National Defence Committee and Foreign Affairs Committee of the Riigikogu will be responsible for organising it. 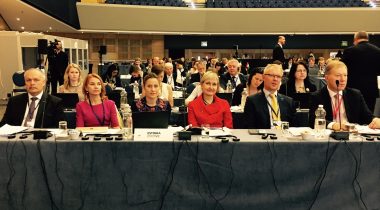