Speaking about the activities of Eesti Pank, Müller began with the topic of currency circulation in Estonia, which ran smoothly last year. He noted that access to cash had clearly improved over the last few years. The Governor also emphasised that Estonia was a trailblazer in the introduction of the so-called instant payments, which allow money to move between accounts in different banks in a matter of seconds.

In 2019, the investment portfolio of the central bank saw a huge increase, reaching EUR 1.2 billion by the end of the year. “The profitability of the Eesti Pank investment portfolio is exceptional, and we made a profit of nearly EUR 39 million on investments. This allowed us to allocate a larger part of the annual profit than usually into the state budget, in total nearly EUR 19 million,” he said.

Müller explained that the economic situation in the beginning of June has rarely departed so much from the expectations six months earlier. “While at the end of 2019 we could observe a modest recovery of the global economy after international trade wars, today we are facing a global recession,” he said. Müller recalled the International Monetary Fund January Outlook, which predicted an over 3% economic growth for this year; however, by April, the IMF was predicting a similar global economic recession. “Moreover, in developed countries, the economic recession will be twice as fast. A recession of this magnitude over such a short period has been rarely experienced before,” the Governor explained.

“We know that as early as the first quarter, the quarantine measures led to a nearly 4 % economic drop in the euro area in quarter comparison, and in the second quarter the downturn is likely to speed up,” Müller said. “If there is no need to implement new quarantine measures to control the virus, and the measures so far turn out to be efficient, the economy could restart quite rapidly on the second half of the year. But this is not enough to return to pre-restrictions levels by the end of the year,” he said. Müller added that all the outlooks are currently speculative, but the total production of the euro area is not likely to return to the pre-pandemic level before 2022.

Müller described the standing of the Estonian commercial banks as financially sound, both compared to banks in other countries as well as the last crisis. “Nevertheless, Eesti Pank decided to circumvent any problems by alleviating the capital requirements for banks, and take the systematic risk buffer from one percent to zero. This clears EUR 110 million in capital for the banks, allowing these to offer additional loans to individuals and businesses during a difficult time, or cover the losses from loans,” he said.

“It is very significant that the banks have been offering their clients flexible grace periods. They have also managed to agree between themselves that changing the payment schedule does not lead to imposing increased interest rates due to increased risks, nor charging the normal fee for changing contracts,” Müller said. He added that this has made the crisis considerably easier to bear for both businesses as well as families with housing loans, for example.

The Governor of Eesti Pank explained that in the near future the central bank would concentrate its attention on how to support post-crisis recovery, both by participating in shaping euro area monetary policy as well as by contributing to Estonia’s economic policy choices. Müller listed the areas that would benefit from strong governmental contribution. He predicted an increasing importance of economic digitalisation and the growing need to support retraining. He also emphasised that when we launch large-scale investment projects, it would be worth considering their alignment with climate goals which Estonia has already assumed and which demand major efforts from the government as well as the private sector.

One Bill passed the second reading in the Riigikogu

Bill on Amendments to the Environmental Charges Act (109 SE), initiated by the Government, passed the second reading.

The Bill would amend the principles for calculating environmental charges for activities which cause the introduction of pollutants into the environment to feed live organisms.

The Bill would provide a specification under which the pollution charge is not imposed if the substances and compounds specified in subsection 17 (1) of the Environmental Charges Act are emitted into a water body, groundwater or soil for the purpose of cultivating live organisms, including plants, animals or fungi. Water pollution charge is paid at an increased rate of the environmental charge if the maximum quantities set out in or regulated under the Water Act. Compared to the current Environmental Charges Act regulation, the amendment does not lead to the responsibility for cultivators of live organisms to pay additional charges.

The first reading of the Bill on Amendments to the Fire Safety Act and Other Acts (120 SE), initiated by the Economic Affairs Committee, was adjourned due to the end of the working hours of the sitting. The deliberation of the Bill will continue at Wednesday’s sitting. 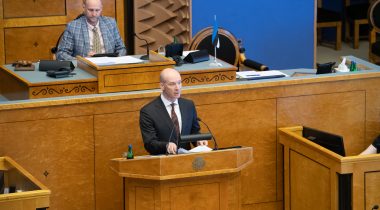