Today and tomorrow, the constituent meeting of the Joint Parliamentary Scrutiny Group on Europol, taking place in Brussels within the framework of the parliamentary events of the Presidency of the Council of the European Union, brings together representatives of national parliaments and the European Parliament.

Head of the Estonian delegation Raivo Aeg pointed out that increasing the interoperability of information systems would be discussed as one of the key issues. “In the current security situation of Europe, it is not possible that member states do not exchange information,” Aeg said. “Cross-usage of data is necessary so that the states and agencies would not have to duplicate their work. In this way, we will also ensure better data protection.” Aeg added that it was also necessary to pay attention to the speed of information exchange. It is needed, for example, for timely identification of foreign fighters or extremists returning to Europe.

Member of the Estonian delegation Kalle Laanet emphasised that in order to ensure security, we had to change our notion of information exchange in the changing world. “The effectiveness of the work of Europol depends on the readiness of the member states to provide information that is important to them,” Laanet said. According to him, Europol can succeed in the fight against organised crime only if member states provide and share their information. However, it will take place in accordance with the data protection regulations and in cooperation with the member states’ parliaments.

Today, Minister of the Interior of Estonia Andres Anvelt, European Parliament Rapporteur on the Europol Regulation Agustín Díaz de Mera García Consuegra, Deputy Director General of the Police and Border Guard Board of Estonia and Chairperson of Europol Management Board Priit Pärkna and European Data Protection Supervisor Giovanni Buttarelli will speak at the meeting. Tomorrow, the discussion on the priorities of the EU in the fight against organised and serious international crime will continue. Presentations will be made by Chair of the Standing Committee on Operational Cooperation on Internal Security Erkki Koort and Deputy Director General for Security of the Directorate General for Migration and Home Affairs of the European Commission Olivier Onidi, and Europol Executive Director Rob Wainwright. 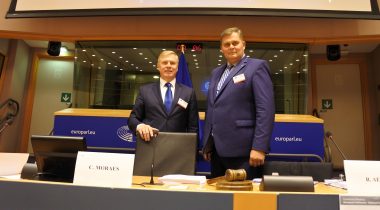