The Act on Amendments to the Constitution of the Republic of Estonia for Reducing the Voting Age for Local Government Council Elections (703 SE) was initiated by 41 members of the Riigikogu and its purpose is to involve, by lowering of voting age, more young people than before in the discussion and deciding of public issues of local life.

The initiators of the Act noted in the explanatory memorandum that the Estonian society keeps ageing, therefore the importance of senior voters is increasing in the elections and thus the age of the people that pass the decisions on the issues concerning the life of the young is ever growing. Lowering of voting age would increase the percentage of young people among eligible voters.

The initiators believe that the amendment might increase the interest of young people in politics, the state and the development of the local government. It is the level of the local government council where most of the decisions concerning the young people are made – like the decisions on the schools network, sports facilities and possibilities for leisure activities.

In order to enter into force, the Act had to be approved by two consecutive compositions of the Riigikogu. The previous, 12th Riigikogu approved the Bill on 11 February. The next local government councils elections will be held in 2017, and at these elections young people aged 16 and 17 years will be able to cast their votes. 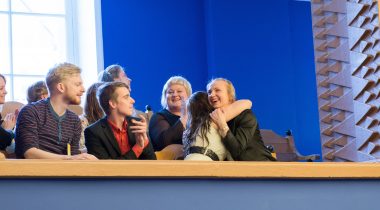