The Administrative Reform Bill passed the first reading in the Riigikogu. It sets the minimum size of a local government at 5000 residents, and provides for merger of small local governments.

The Minister of Public Administration Arto Aas, who presented the Bill on behalf of the Government, said that up to now no Estonian Act has set out what capability a local government must have to be able to independently ensure all essentially local government tasks. “The results of different analyses, and the positions and discussions of experts relatively unanimously indicated the correlation of the number of residents in a local government with the capability of the performance of the local government,” he said. “On the basis of an assessment of different service areas, the competence of officials and financial capacity, the expert committee reached a recommendation to apply the minimum size criterion of 5000 residents.”

Aas noted that a local government with no less than 5000 residents has the professional administrative capability to perform the local government functions provided for by law and to offer high-quality public services to its residents. “At the same time, experts were of an opinion that local governments with 11 000 and more residents cover a larger region and allow for a qualitative change in the proportion of strategic management,” he added. “This is why, under the Bill, the recommended size of a local government is 11 000 residents and it will be supported with payment of an additional merger grant from the state budget.”

Siim Kiisler, who made a report on behalf of the Constitutional Committee, gave an overview of the discussion in the Committee. When answering the questions of members of the Riigikogu, he stated that it is complicated to impose an obligation to maintain an upper-secondary school on a local government with a small number of residents. “The larger and stronger our local governments become in the course of this administrative reform process, the more functions it will be possible to assign to them,” he added. “The more such functions we can assign, the more adequate and fair money can we give them together with the functions. This means that everything begins with the size of the local government, and the next steps follow from that.”

Kersti Sarapuu who spoke on behalf of the Centre Party Faction said that until no contentual changes have been made in the functioning of local government, in the revenue base and in the regional administration of the state, the Centre Party Faction cannot support mechanical and often illogical merger of local governments. “We think that entrepreneurship and the development of living environment in rural areas should be tackled. The state should ensure free public transport in counties, available medical care, and other public services,” she noted. “We are of the opinion that, at first, the functions and financing of local governments should be agreed upon at the legislative level.”

Artur Talvik who spoke for the Free Party Faction said that the Administrative Reform Bill should be thoroughly redrafted and local governments should be given more power. “With this reform, the power may grow even more distant from the people. We would like to give strong decision-making power to the low level here. However, for all that to function, it would be very necessary that the current government coalition listen also to the opposition,” he added.

Ivari Padar who took the floor on behalf of the Social Democratic Party Faction said that the Estonian society is waiting for changes in both public administration and the local government administration. “I and our faction are far from thinking that this administrative reform will solve all regional policy problems and concerns. It is after all “one element” which, in the first place, is called the administrative-territorial reform,” he said. “All that concerns other regional policy measures – they are supposed to be supplementary to this Act.”

Andres Metsoja who spoke on behalf of the Pro Patria and Res Publica Union Faction said that the administrative reform is not a magic wand that will help solve all today’s worries: the decrease of the population, the higher than average proportion of elderly and disabled people, and low incomes. “These issues must be actively addressed at both national and local level. At the same time I am convinced that, when nothing is done, the life of small local governments will become more and more complicated, and discrepancies between the more successful ones will deepen,” he noted. “Also the “nationalisation” of our local governments will continue, where seemingly the decision-making right is at the local level, but the greater amount of money has been earmarked already. A weak local government is actually a weakness for the whole country.”

Martin Helme, who spoke on behalf of the Estonian Conservative People’s Party, said that the Estonian Conservative People’s Party was not against the administrative reform, but it did not support the Bill that was being discussed in the parliament. “The greatest mistake or problem of this reform is that it forces peripherisation. In terms of regional policy, it is exactly the opposite of what is needed,” he noted. “In terms of regional policy, we would need to stop or reverse peripherisation, but this administrative reform will force peripherisation. In smaller rural municipalities that will disappear now, schools will disappear, libraries will disappear, cultural centres will disappear, and road maintenance will become scarcer.”

Urve Tiidus, who spoke on behalf of the Reform Party Faction, said that the idea of the administrative reform is that the capacity of local governments to offer local services would increase. “First, at professional level, in the right time, be it for example the removal of snow from roads in winter, and, second, by not increasing governance costs per resident, but at the same taking care that people in more distant regions will not remain alone and isolated when the rural municipality centres move further away,” she said.

The Estonian Conservative People’s Party Faction moved to reject the Bill. 9 members of the Riigikogu voted in favour of the motion and 48 voted against; there were 7 abstentions. The motion was not supported by the Riigikogu.

The deadline for motions to amend the Bill is 20 April.

The Riigikogu concluded the first reading of two other Bills:

The Bill on Amendments to the Equal Treatment Act (189 SE), initiated by the Government, will transpose into the legal space of Estonia the provisions arising from the relevant EU directive facilitating the free movement of workers in the European Union. The Bill will enable more uniform application of the rights of workers who are nationals of EU Member States and their third-country national family members, and avoidance of discrimination.

Jaak Madison and Oudekki Loone took the floor on behalf of factions during the debate.

The Estonian Conservative People’s Party Faction moved to reject the Bill. 6 members of the Riigikogu voted in favour of the motion and 39 voted against; there were 7 abstentions. The motion was not supported by the Riigikogu.

The Bill on Amendments to the Penal Code and the Code of Criminal Procedure (191 SE), initiated by the Government, will bring the Code into conformity with EU requirements concerning counterfeiting of the euro and protection of other currencies. The relevant EU directive will have to be transposed into Estonian law by 23 May 2016. The Bill provides for a stricter punishment for preparation for counterfeiting of money, bank cards, other payment means, securities, revenue stamps or state fineness marks. At present, such criminal offences are punishable by a fine. The Bill will provide for up to two years’ imprisonment in addition to that. Also, it will be possible to conduct surveillance activities to detect or prevent such criminal offences.

During the debate, Peeter Ernits took the floor on behalf of the Centre Party Faction.

Photos of the sitting of the Riigikogu: https://fotoalbum.riigikogu.ee/v/Riigikogu/XIII+Riigikogu/06042016/ 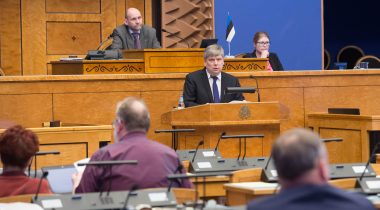