Today, a Bill passed the first reading in the Riigikogu under which the amount of the fine unit that is the basis for imposing fines for misdemeanour in the Penal Code will be increased from four euro to eight euro, and the rate of the cautionary fine for speeding will be increased from the current three euro to five euro.

When presenting the Bill, the Minister of Justice Urmas Reinsalu stressed that the objective of fines does not lie in economic policy or the income policy of the state but in the law-abiding behaviour of the society.

The Bill on Amendments to the Penal Code and Amendments to Other Associated Acts which Increases Fine Unit (146 SE), initiated by the Government, provides also amendments that somewhat alleviate the increasing of the amount of fine unit.

The Minister highlighted that a specification will be established in the Act in the case of a minor, and the maximum amount of a fine imposed on a minor will be half of the upper limit of the sanction. He pointed out as an example that, while the Act provides for a fine of up to 100 fine units, up to 50 fine units can be imposed on a minor.

Second, the term for voluntary payment of a fine will be extended to 45 days instead of the current 15 days. Reinsalu justified it with the fact that usually people have periodical monthly incomes. “Consequently, the logic is that, when a person lives from one pay day to the next, or from one pension to the next, and only a few days remain until the end of the month, the day when income is received should also remain in this one-month period,” he said in justification.

Reinsalu added that, considering the increase of fine rates, the bodies conducting the proceedings will have to inform people of the right to apply for payment of a fine in instalments.

The Bill will also decrease the amount of the lowest possible fine from EUR 12 to EUR 8. According to the new fine unit rate, the minimum fine would be one fine unit, that is, EUR 8.

The amount of fine unit has practically remained unchanged since 1 October 2001. When the euro was adopted in 2011, the unit of the fine for misdemeanour was rounded from EUR 3.8 to EUR 4.

The motion made by the Conservative Peopleʼs Party to reject the Bill at the first reading was not supported. 18 members of the Riigikogu were in favour of the rejection of the Bill and 33 were against.

The deadline for submission of motions to amend the Bill is 27 January.

At the moment, Spain, Cyprus and Greece are ESM customer states.

The Minister of Finance said that the greatest achievements in 2015 had been the continuing successful fulfilment of Cyprus adjustment programme, and two early payments by Spain. After the half-year crisis on the political landscape of Greece that had sowed confusion also in the rest of the euro area, the new adjustment programme for Greece in the amount of 86 billion euro had also been approved which had helped stabilise the Greek economy.

Sester noted that the ESM continues to be one of the highest quality international financial institutions with its ratio of paid-in capital to total capital – 11.4 per cent. Therefore, the crisis in the summer had not affected the evaluation of the leading rating agencies to the ESM, and both Moodyʼs and Fitch had confirmed the top ratings given in previous years.

“Participation in the ESM is a guarantee for Estonia that euro area countries that are experiencing economic difficulties will not jeopardise the euro area as a whole and will not thereby endanger the financial stability of Estonia,” Sester said.

Estoniaʼs participation in the ESM remains below 0.2 per cent of capital.

Kadri Simson, Aivar Sõerd, Martin Helme and Kalvi Kõva took the floor on behalf of factions during the debate.

The Bill on Amendments to the Tax Information Exchange Act and the Taxation Act (145 SE), initiated by the Government, will bring the Estonian legal space into conformity with the international developments that have taken place in the field of taxation with regard to cross-border automatic exchange of information.

Member of the Riigikogu Urve Tiidus said that two motions to amend the Bill had been submitted. The first motion to amend will give the owner of the account the possibility to confirm that he or she is the owner of the account also in a format which can be reproduced in writing, e.g. with a PIN calculator, PIN-1 or some other means, in addition to handwritten or digital signature. The other amendment concerns the deadline for entry into force. The Act would enter into force on the following day after its publication in the Riigi Teataja, and so legal certainty as regards rights and obligations will be ensured to owners of accounts at the earliest opportunity.

The Bill on Amendments to the Family Law Act and Amendments to Other Associated Acts (112 SE), initiated by the Government, will ensure smooth implementation of the Rome III Regulation.

The Bill on Amendments to the Law of Succession Act and Amendments to Other Associated Acts (113 SE), initiated by the Government, will ensure smooth implementation of the EU Regulation on succession matters.

The Regulation covers all EU member states, except for Great Britain, Ireland and Denmark. The Regulation regulates which law is applicable to a matter of succession and in which Member State it must be settled. Also, the circulation of succession documents in the European Union is simplified, and the European Certificate of Succession is created as a new document that gives the citizens an additional possibility to certify their rights in another Member State more simply. The Bill will grant notaries an additional competence to settle successions with cross-border implications. As a general rule, a matter of succession has to be settled in the state of the usual place of stay of the bequeather, but in addition to that, additional grounds are provided for in the Regulation.

The motions to amend concern for example the transfer of a will made on a ship and deposited with the master of the ship to the succession register or a consular officer of a foreign mission of Estonia. The motions to amend arise from the fact that, up to 2015, Harju County Court maintained the succession register, but the Chamber of Notaries maintains the register as of the beginning of this year. Therefore, in the future, the will should be transferred to the notary, instead of the succession register of Harju County Court. At the same time, in the interests of legal clarity, it will also be reasonable to refer to the Chamber of Notaries, instead of the county court, in the Act on the Ratification of the Convention on the Establishment of a Scheme of Registration of Wills.

In addition to the Bill concerning the amount of fine unit, seven other Bills were at the first reading.

The Bill on Amendments to the Estonian Defence League Act and the Military Service Act (153 SE), initiated by the Government, will enable the medical commissions within the area of government of the Ministry of Defence access to the data on persons in the e-health information system if they have given their consent thereto. So the medical commissions will obtain the data necessary for health tests of persons liable to national defence obligation directly from e-health, and they in turn will be able to enter the results of their tests and diagnoses into the system. The Bill will also amend the procedure for granting staff accommodation to servicemen. An exemption concerning the working during the provision of host nation support in international military cooperation will be included in exemptions of working time and rest period applicable to servicemen.

The Bill on Amendments to the Electronic Communications Act and the Product Conformity Act (130 SE), initiated by the Government, will bring the regulation of radio equipment into conformity with the new EU radio communication directive. The new definition of radio equipment will cover all radio transmitting and receiving equipment that are in civil use. The definition will include radio receiving equipment (e.g. television receiver and radio receiver), as well as electronic equipment with a radio module (e.g. vacuum cleaners and refrigerators if they are radio controlled). Fixed line terminal equipment, e.g. landline telephones and fax machines, will be outside the scope of the radio equipment directive. It is also important for the consumer that more specific requirements will be set for producers with a view to improve the compatibility of different accessories. For example, it will be possible to set a requirement for the producer that a mobile phone charger should be suitable for charging a tablet and vice versa.

The Bill on Amendments to the Law of Obligations Act and Amendments to Other Associated Acts (152 SE), initiated by the Government, will transpose the EU mortgage credit directive which will harmonise the regulation of housing loans. The amendments concern all loan agreements to consumers the aim of which is the purchasing of a registered immovable, those secured by a mortgage as well as those unsecured. In addition to housing loans granted by banks, the amendments relating to the Bill concern also consumer credits granted by smaller loan offices. The Bill provides that more information on a housing loan agreement will have to be provided to the consumer. In the future, a creditor will have to notify of the basic content of a housing loan agreement and the possibilities related thereto as general information on its website.

The Bill on the Ratification of the Work in Fishing Convention (No. 188) of the International Labour Organization (126 SE), initiated by the Government. The objective of the Convention is to ensure that fishers have decent conditions of work. The Convention covers the generally recognised rights of fishers to satisfactory accommodation, food and occupational safety, as well as health protection, medical care and social security, and placement in connection with maritime labour. The ratification gives the state advantages in communication with the maritime supervision authorities of other port States. Ships flying Estonian flag will have better possibilities of avoiding long-term inspections in foreign ports.

The Bill on the Ratification of the Maritime Labour Convention of the International Labour Organization (127 SE), initiated by the Government. The Convention provides for the right of every seafarer to fair terms of employment, decent working and living conditions on board ship, as well as health protection, medical care, welfare measures and other forms of social protection. In addition, the provisions of the Convention help enhance the supervision of the working and living conditions of crew members and, in connection with that, the supervisory obligations of the flag and port state. The Convention applies to all ships that participate in economic activities offshore. 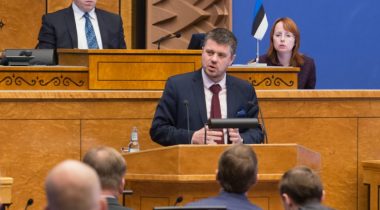