Pursuant to the Bill on Amendments to the Riigikogu Rules of Procedure and Internal Rules Act (176 SE), initiated by the Constitutional Committee, a sitting may be held with remote attendance if the members of the Riigikogu are ensured the possibility to follow the sitting and carry out the proceedings of the sitting (submitting a Bill, presenting a report, asking an oral question, making comments, protests, voting, and other activities) from a remote location, and also have the possibility to report of the impediments to performing such activities.

Three more Bills passed the first reading in the Riigikogu:

The Bill on Amendments to the Courts Act and the Code of Civil Procedure (175 SE), initiated by the Government of the Republic, will create a mechanism in the Courts Act that allows to transfer court cases to other courts of the same instance if it is necessary for the administration of justice pursuant to the established procedure. The amendment will give the courts flexibility in handling large workload.

Jurisdiction of court cases and the location of hearing a matter will not change in the course of delegation between the courts. The cases that are transferred to other courts on the basis of existing statistics are mainly the cases resolved in written proceedings; however, the mission expenses are reimbursed to the judge if necessary.

In order to transfer a court case to another court, the chairman of the court has to submit a motivated request to the chairmen of circuit courts, indicating the risks to the administration of justice pursuant to the established procedure and the explanations as to why it cannot be ensured by other means established in the Courts Act The chairmen of circuit courts will jointly make a decision on transferring the case to another court. The amendment will grant the Council for Administration of Courts the competence to establish detailed guidelines for transferring court cases to another court.

Besides that, the right to get extraordinary assistance is provided; with the consent of the chairmen of courts, matters can be discussed on a voluntary basis at other courts of the same or lower instance, or in the mission for proceedings of a judge. Additionally, it will be allowed to extend the authority of judges released from office at their request or due to age in exceptional cases, when it is necessary for finalising the proceedings in matters distributed to them. The obligation of a judge to submit a request to be released from office at least six months prior to the desired date of the release will be extended to at least nine months.

With the amendment to the Code of Civil Procedure, the resolving of all appeals filed against orders on entry in registry matters will be transferred to the special jurisdiction of Tartu Circuit Court through Tartu County Court. The aim of the amendment is to concentrate the competence in registry matters to the territorial jurisdiction of Tartu courts and thereby increase the specialisation of judges.

A significant amendment to the Plant Protection Act is extending the obligation to submit a notice of economic activities to almost all operators engaged in selling of planting material. The requirement of activity licence will be extended also to the operators who, for example, wish to make wooden packing material to operators wishing to issue plant passports.

The principles of financing follow-up phytosanitary inspections will be changed. The initial supervision step will continue to be financed from the state budget funds. Supervision fee will be established for the inspection that was not planned to be performed at first, but proved to be necessary due to the violation discovered during an official inspection. The state fees of the plant health field will also be updated to cover the expenses of official inspections.

In the Organic Farming Act, the general principles of performing official inspections, and the requirements for taking and analysing of samples will be provided. Pursuant to amendment, the authorisations for placing on market of imported organic products will be no longer granted because the relevant EU import system has changed. The state fees for supervisory acts will also be updated in order to compensate the increase of supervisory expenses due to the rapid development of organic farming sector.

The Agricultural and Food Board, formed after merging of the Agricultural Board and the Veterinary and Food Board, will perform all the main functions of the two agencies, which among other things, requires retaining of the present staff. As a result of reorganising the two boards, the capability of risk-based inspection will increase, the management of information in the whole food production chain will improve, and the quality of prevention and information activities to reduce offences will grow. The communication aimed at clients will be more integrated, and the administrative burden to clients will be reduced.

By the time the Act enters into force, the activities related to reorganisation – including the preparation of the Statutes, the structure and composition of the staff of the new Board, and the human resources activities connected with it; planning of the possible expenses relating to reorganisation and drafting the budget of the new agency; making the necessary amendments to legislation on the basis of the amended Acts – will be completed.

Under the Bill on Amendments to the Liquid Fuel Stocks Act (133 SE), initiated by the Government, in the future, during the first six months of a calendar year, the compulsory liquid fuel stocks will be calculated on the basis of the data for the last year but one before the calendar year in question. Earlier, such calculation method could be applied only during the first three months of a calendar year. As a general rule, the compulsory liquid fuel stocks are calculated on the basis of the quantities imported or consumed during the previous calendar year. In addition, references to European Union law will be specified in the Act. The Bill will transpose a European Commission implementing directive.

The Riigikogu did not pass a Resolution

The purpose of Draft Resolution of the Riigikogu “Making a Proposal to the Government of the Republic to Draw Up Legislative Amendments to Solve the Problem of the Long-term Care Burden” (149 OE), submitted by the Social Democratic Party Faction, was to make a proposal to the Government to prepare legislative amendments in order to resolve the problem of long-term care burden so that human-centred provision of care would be ensured to all who need help.

Minister of Foreign Trade and Information Technology Raul Siem took his oath of office before the Riigikogu. 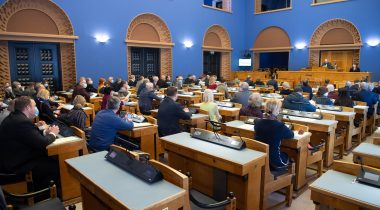