The interpellators referred to a recent audit by the National Audit Office focusing on the construction of Rail Baltic which was critical of the central activities as well as the developments in Estonia. The interpellators wished to know, among other things, what the Prime Minister’s assessment of the current progress of the Rail Baltic project was and how he assessed the current activities of Latvia and Lithuania in the realisation of the Rail Baltic project.

Prime Minister Ratas noted that the Rail Baltic project had moved from the planning phase to the design stage in all three Baltic states by now, and construction works had started or were about to start on the territories of all three countries. According to him, contracts for the preparation of the basic design documentation for the railway and related infrastructure in all three sections of the main route have been entered into in Estonia by now. The designing of the major local sites has also begun. “Rail Baltic will pass through a total of 864 cadastral units in Estonia. 621 of them are cadastral units belonging to private owners and 74 are cadastral units belonging to local governments which will have to be acquired to the state for the construction of Rail Baltic. About 40 plots of land had been acquired by February this year,” Ratas said.

The Prime Minister admitted that, in a democratic society, the planning of large-scale infrastructure projects and sites took time, and often it was impossible to stick to the projected timeline. “For example, the planning phase of Rail Baltic lasted from 2012 to 2018, although the deadline for planning was as early as the end of 2015 according to more optimistic projections. As you can see here too, there is a difference of about three years,” he stated. Ratas confirmed that such risks had been taken into account when planning the project and that it was still possible to complete Rail Baltic by the deadline.

As to the activities of Latvia and Lithuania, the Prime Minister said that Rail Baltic was in a similar phase in those countries as it was in Estonia. “Spatial plans were established in Latvia as early as 2016 and in Lithuania in 2017. The sections between Kaunas and the Lithuanian-Polish border and between Kaunas and Vilnius need separate decisions. Preparation of the designated spatial plans has been started. Design work is underway on a 270-kilometre route to the extent of about 75%. Lithuania has made the most progress with construction works in Kaunas region. A contract for the construction of Riga airport terminal and railway will be concluded by the end of 2020. More important is the goal reiterated by the Prime Ministers of all three Baltic states in Tallinn in February: to complete the construction of Rail Baltic rail link by the deadline,” Ratas said.

The Minister of Education and Research Mailis Reps replied to the interpellations concerning the Institute of the Estonian Language (No 22) and concerning countering the import of the ideology, that is, the influencing activities of the Russian Federation in Estonia (No 26).

Video recordings of the sittings of the Riigikogu can be viewed at
https://www.youtube.com/riigikogu. (Please note that the recording will be uploaded with a delay.) 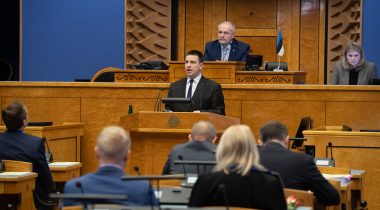