The interpellators inquired about the reasons behind the delay in launching the support measures.

Kallas explained that the government had decided on the following compensation measures for the increased energy prices. Firstly, a 50% reduction in the power network charge, in the total amount of EUR 88.25 million, which will benefit every electricity consumer, whether a natural or a legal person. Secondly, elimination of the gas network charge in full, in the total amount of EUR 25.08 million. This concerns every gas consumer, both natural and legal persons. Thirdly, there is a targeted measure for households where the income per person remains below the median salary. “In this case, 80% of the price increase in energy expenses – I am talking about electricity, gas, and central heating – is compensated. This will be in effect from September to March, also retroactively,” Prime Minister said.

She pointed out that the previously agreed complementary measures were added last Thursday. “First of all – the price cap for all household customers has so far been 12 cents per kWh, for up to 650 kWh of consumption. This will be deducted by the seller of electricity from the bill from January until March. And second, the gas price cap for household customers is EUR 65 per MWh, and anything over that will be fully compensated by the state up to the consumption of 2.75 MWh. This is done from January until March. For business customers, we will additionally fully compensate the power network charge, and this is also in effect from January until March,” Kallas added.

Prime Minister explained that the government adopted the first energy price increase support measures at the end of October, and that the first support measures benefited the residents in a matter of a fortnight. For example, the bills for energy consumption in October, which were sent out in November, already reflected the measure to reduce power network charge. And at the end of November, i.e. a month after the government’s decisions, the Minister of Public Administration signed the resolution of the targeted support measure, and its application along with a test period was developed within 1.5 months, which is an extremely short time in IT development. This would usually take at least nine months. But the delay was necessary to allow local governments time to prepare.

Kallas said that the response in alleviating the increased electricity prices has been quick and efficient; the first decisions were made as early as October 2021, and the most recent date from last week. “The volume of the governmental support measures alone is EUR 325 million. At the moment, Estonia has one of the largest, most farsighted and extensive programmes for supporting household customers and businesses in the whole of Europe,” Prime Minister said.

Minister of the Interior Kristian Jaani responded to the interpellation concerning the reduction in the opening hours of the service bureaus of the Police and Border Guard Board.

During the open microphone, Kalle Grünthal, Alar Laneman (both from the Estonian Conservative People’s Party), and Heiki Hepner (Isamaa) took the floor. 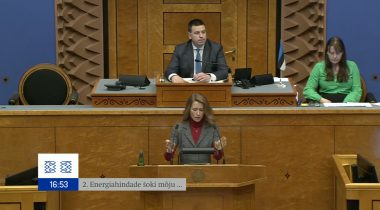