The Riigikogu approved the Act on Amendments to the Military Service Act and Other Acts (447 SE), initiated by the Government, which abandons the special pensions that were created to compensate for low wages in the state sector in the 1990s and at the beginning of the 2000s in the Defence Forces, the police, the border guard and the prosecutor’s office.

According to the Act, special pensions will be eliminated during a transitional period. Persons who are in the service on 31 December 2019 will continue their entitlement to special pension. Persons who enter the service after 1 January 2020 will not be entitled to a special pension. The amendments established by the Act will have a long-term impact. The granting of pensions will go on for up to another 30–40 years, and the payment for 70–80 years. At this stage, the amendment will not affect pension costs. The increase of costs will begin to diminish after 20–30 years. The Act comes into force at the beginning of 2020.

During the debate, Mart Helme (Estonian Conservative People’s Party) took the floor, and presented his position on the Act and gave his reasons for not supporting the passage of the Act.

53 members of the Riigikogu supported the passage of the Act, 13 voted against, and there were two abstentions.

At the beginning of the sitting, the Riigikogu held a moment of silence in remembrance of the victims of the June deportation and their close ones. 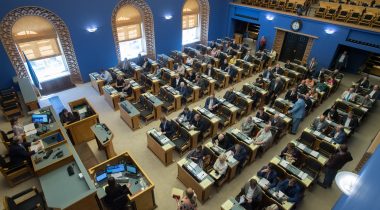