Chairman of the State Budget Control Select Committee Jürgen Ligi, Governor of the Bank of Estonia Madis Müller, Chairman of the Fiscal Council Raul Eamets and Chairman of the Board of the Estonian Chamber of Commerce and Industry Toomas Luman delivered reports.

Jürgen Ligi said that affordable spending had been an Estonian tradition for two decades, and for a long time, Estonia had had reasons to be proud of it. He added that therefore Estonia had been somewhat ahead of the times when Europe as a whole, and especially some South European countries, had been living in debt for a long time. “Their debts have piled up, they have had to spend a great part of their time or a great part of their energy, their economic potential to serving their debts,” Ligi said. He remarked that Estonia had been more stable in that sense. “However, when the tendency in Europe is towards repentance, then it is exactly the opposite in Estonia. The government that took office in 2016 managed to significantly worsen also the budget for 2016 by adding expenses and removing revenues, and in 2017, such a decline began that even international organisations started to react to it with criticism,” Ligi said.

Ligi pointed out that the National Audit Office had drawn attention to the fact that Estonia’s actual budgetary balance had grown drastically worse, even in comparison to the predictions. “When the budget rule was slackened, they allowed themselves a deficit which was not adequate. In real life, control over expenses disappeared and for years, there were errors in one direction, towards the negative, and this was both nominally and structurally. The situation is worsening, by the amount of defence spending, by the amount of one year’s defence spending we were on the negative side last year, and slack behaviour was the reason for that to a great extent.”

Ligi said that he believed that Estonia’s future would be more interesting than or as interesting as during the recession, because all problems of the structure and the budget had been hidden under loan money. “On the one hand, there have been problems with using the loans; on the other hand, these decisions are continuously hidden, even in this hall.”

Müller pointed out that in the last four years, the budget of Estonia had been in deficit, and therefore the reserves of the country were smaller. “After the current crisis has abated, we should think how to avoid the situation where the budget is in deficit in good times in the future,” he noted.

“The prospect of the Estonian, euro area and the world economy is very insecure and it is difficult to predict what will happen. The European Commission forecasts Estonia’s economic recession to be 6.9 per cent this year, which is near the euro area average, where the European Commission predicts a little greater economic recession, 7.7 per cent. According to the latest baseline scenario of projections of the European Central Bank, the economic downturn in the euro area this year could be 8.7 per cent. According to the projections published so far, Estonia and most of our larger trade partners will achieve their pre-crisis economic level only by 2022,” Müller said.

Raul Eamets said that on the proposal of the European Commission, the escape clause of the budgetary rules of the European Union had been implemented for the first time this spring. It gave the states an opportunity to temporarily depart from the requirements on public finances in order to support their economies with aid measures. The escape clause was automatically implemented also in the Estonian budgetary rules, which enables to postpone resolving of earlier mistakes. So that although the structural budget position of the government sector did not improve in 2019, in the opinion of Eamets, the government has no obligation to improve the position also in 2020.

“At present it is not known how long the escape clauses will be in force, but it is necessary to ensure that the long-term sustainability of public finances is not harmed also when the escape clause is in force,” Eamets said. According to the spring forecast of the Ministry of Finance, the nominal budget deficit of Estonia will reach 10 per cent of GDP and the structural deficit 5 per cent of GDP. “In the opinion of the European Commission, the expected deficit exceeds the deficit allowed by the rules, but in the present conditions, no infringement proceedings will be initiated,” Eamets said.

He added that in the opinion of the Fiscal Council it was important that the government presented, at the latest by autumn, a long-term view of the Estonian economy and public finances, or some scenarios together with the planned measures for restoring budgetary balance. “At the time when it is hard to assess the situation and structural position of the economic cycle, it is reasonable to proceed from the indicators of nominal budgetary position in setting the budgetary targets. In 2021, the starting point could be that the deficit should be lower than 3 per cent of GDP, which is one of the well-known European Union criteria.”

Toomas Luman said in his report that the entrepreneurs expected the budget policy to be predictable and stable, and that it would support the effective functioning of the state and the availability of public services. It should also be sustainable and affordable.

In Luman’s opinion, Estonia should preserve the state’s borrowing capability also for possible future crises. “If we continue borrowing enthusiastically, then most probably we will not have that capability next time, or it is very small,” he pointed out.

Luman emphasised that it was possible to support the entrepreneurs to a greater extent and with lower risk through loan surety, and therefore the amount allocated for sureties should be increased. He added that the maximum total responsibility of KredEx towards banks and lessors should be increased to 40 per cent. Luman also spoke about the expectations of entrepreneurs regarding the support measures. He said that the state should provide support only to those entrepreneurs on whose activities the crisis had had the greatest negative impact. The support measures should be transparent, and the state should treat the entrepreneurs equally and ensure fair competition. The criteria for granting support should be connected with the labour taxes paid to the state. He also found that the conditions for loan surety by KredEx should be mitigated.

The Riigikogu passed an Act

The Act will provide a specification under which the pollution charge is not imposed if the substances and compounds specified in subsection 17(1) of the Environmental Charges Act are emitted into a water body, groundwater or soil for the purpose of cultivating live organisms, including plants, animals or fungi. Water pollution charge is paid at an increased rate of the environmental charge if the maximum quantities set out in or regulated under the Water Act. Compared to the current Environmental Charges Act regulation, the amendment does not lead to the responsibility for cultivators of live organisms to pay additional charges.

86 members of the Riigikogu were in favour of passing the Act.

The Riigikogu suspended the second reading of one Bill:

The Bill on Amendments to the Family Benefits Act and Amendments to Other Associated Acts (185 SE), initiated by the Government, will specify the payment of child benefit for children under 16. Pursuant to the Bill, the payment of parental benefit can be suspended and continued based on calendar months until the child attains three years of age, according to a parent’s choosing. The Bill also specifies that parental benefit can be suspended and continued only after the child attains 70 days of age. The amendments will ensure legal clarity so that mothers who are not entitled to maternity benefit could use their individual right to a benefit during the first 70 days of life of the child, and this right would not be transferable to the father later with a suspension of the parental benefit.

The Bill would also extend the period of successive births when the new parental benefit is calculated on the basis of earlier income to three years. The amendment is necessary in order to ensure the livelihood of families upon successive birth of children, to prevent the postponement of desired births and to bring the provision on the same bases as the length of parental leave.

Besides that, the regulation regarding the payment of maintenance allowance during the enforcement procedure would be amended. The Bill would create the possibility to start paying maintenance allowance three months sooner. This would improve the livelihood of parents raising their children alone, enabling them to ensure the growing environment necessary for the child.

Signe Riisalo (Reform Party) took the floor during the debate.

On the motion of the Social Affairs Committee as the lead committee, the Riigikogu decided to suspend the second reading of the Bill, and to set 10 a.m. on 11 June as the deadline for submission of motions to amend.

The second reading of one Bill was postponed due to the end of the sitting:

The Bill on Amendments to the Police and Border Guard Act (161 SE), initiated by the Legal Affairs Committee, provides for ensuring the police officers and border guard officials as well as their family members, who are beneficiaries of disability pension or survivor’s pension, a pension that is at minimum equal to the pension they would have received if the basis for calculating their pensions had not been reduced by 8 per cent from 1 July 2009.

Verbatim record of the sitting. 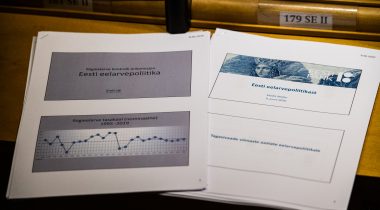