Today, the Riigikogu deliberated the possibilities for the establishment of broadband or high-speed Internet in Estonia as a matter of significant national importance.

Reports were by the Deputy Chairman of the State Budget Control Select Committee Andres Metsoja, the Minister of Economic Affairs and Infrastructure Kristen Michal, Manager of the Estonian Broadband Development Foundation Priit Soom and representative of Topest PLC Olav Harjo.

Metsoja said that no-one doubts the necessity of Internet connections everywhere across Estonia. “It is not a problem of only rural people and communities, but these problems very clearly exist also in cities,” Metsoja stated. As examples, he mentioned Nõmme and Pirita in Tallinn, and the city of Pärnu.

Metsoja said that the key issue for Telekom enterprises lies in how optical cable networks could replace the existing copper cable networks that restrict the spread of ultra-high-speed Internet.

He stressed that the state has paid for the construction of the basic network that takes the Internet to mobile communications masts. In his words, as an intermediary stage, this has been a very right way that gives an opportunity, but radio communication has its constraints in terms of volume.

Metsoja referred to the development plan of information society until 2020, which sets the target of availability of 30Mb/s Internet for all residents of Estonia. The target for the share of the use of ultra-high-speed 100Mb/s Internet connection is 60 per cent of households. He also referred to a study by the Estonian Association of Information Technology and Telecommunications, according to which the connection of a household to high-speed Internet would cost EUR 2500 – 11 000. It might cost nearly EUR 400 million in total for Estonia.

Metsoja made a proposal to develop a specific action plan that should also contain a description of financial instruments, and to take a county-based approach to the solution of the problem.

The Minister of Economic Affairs and Infrastructure Kristen Michal said that only the construction of the basic network will not be enough to bring high-speed Internet to the people; access networks, or the ‘last mile’, will also be needed. In the Minister’s words, this can be achieved both by cable and mobilely. The latter needs no additional measures from the state, is more advantageous to access for the end-consumer, and covers the Internet need of an average consumer. The Minister pointed out that the target for the availability of mobile Internet had been 80 per cent of the Estonian territory, and it has been achieved by today.

In Michal’s words, a greater obstacle in taking the fixed connection to the end-consumer is the high installation price. As a solution, he suggested that those who wish to have high-speed Internet should cooperate with neighbours and at the local government level. He called on people and local governments and communities to take the initiative, and pointed to the model of Suure-Jaani rural municipality.

In Michal’s words, in cooperation with communications enterprises and experts in this field, a great number of Acts has been identified as in need of amendment in order to reduce the price and the time required for establishing fixed access connections. As examples, he mentioned the Building Code, the Law of Property Act, the General Part of the Civil Code Act, the Code of Enforcement Procedure and the State Fees Act, which have connection with the legal provision of the construction of broadband networks. An amendment of the legislation will give an estimated saving of 4–5 times.

“A more favourable price would make the establishment of connections economically more attractive for communications undertakings, and would significantly reduce the need for the state and local governments to implement support measures,” Michal said.

One possible solution, the Minister said, is to install fibre optic cable also on the existing street lighting posts which gives a remarkable saving in low density regions.

Manager of the Estonian Broadband Development Foundation Priit Soom said that the establishment of the basic broadband network in Estonia is the most important regional policy project, and he compared its importance to that of the ferry connection for inhabitants of Vormsi Island.

Soom said that the task of the Broadband Development Foundation is to take the basic broadband network based on optic cables across Estonia to regions with a market barrier where the market demand in itself does not create a supply of broadband. “Our task is not to focus only on profitable regions, but our task is to connect low-density areas of Estonia,” he said. In his words, if today’s pace is continued, it will bring the availability of the basic broadband network to at least a 1.5 kilometre distance for 98 per cent of the Estonian people, enterprises and authorities by 2018.

“It is no use having cable in every village if the enterprises and people and homes there are not connected to it in the end,” Soom said. He pointed out that the European Union’s structural funds investments intended for the establishment of the basic network have definite rules, and these financing sources must by no means be used to establish the ‘last mile’ connections.

Soom noted that the state has invested European Union funds in the amount of EUR 35 million into the basic network, and the Estonian Broadband Development Foundation has added additional EUR 5.6 million from own funds to it. The rapid development of the basic network has brought private sector investments into the development of the ‘last mile’ connected with EstWin base network, and communications operators have contributed EUR 30 million into it.

In his report, representative of Topest PLC Olav Harjo observed that it seemed as if two different Estonias had emerged. “In apartment buildings and business districts, competition is functioning and service providers are offering increasingly better Internet connections and lower prices. In rural areas, however, the market is not functioning and people have to be content with a worse Internet connection and a higher price,” he described. “No country can afford such a digital gap between country and city.”

Harjo proposed the first three steps that the state will have to take in order that communities, local governments and operators could begin to plan and construct new broadband networks – the amendment of regulations, the development of financial solutions and the establishment of a centre of excellence.

Similarly to Michal, Harjo also said that the construction costs of broadband can be reduced by up to five times by using the already existing infrastructure instead of making duplicating constructions.

The members of the Riigikogu who took the floor on behalf of factions during the debate expressed support to the establishment of the basic broadband network and taking it to the end-consumer. 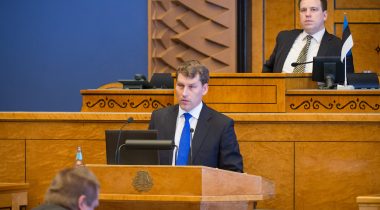