At today’s sitting of the Riigikogu, deliberation of the matter of significant national importance “The state founded on liberty, justice and the rule of law” was held at the initiative of the Legal Affairs Committee.

Kert Kingo said that the employees of internal control units were unable to fight corruption, because they had to take guidance from the law and at the same time take into account their employers. Kingo said that the risk of corruption was in fact the greatest in the case of managers, and no manager wished for corruption to be discovered in the authority he or she managed, and therefore internal control departments in their present form did not meet their purpose.

In his report, Leo Kunman focused on administration of justice from a personal point of view. Kunman said that the head of the prosecutor’s office should be chosen at a public competition and then it should be considered who should exercise supervision over the prosecutor’s office. Kunman also expressed an opinion that the Supreme Court could provide reasons when it decided not to accept a criminal matter.

The Bill on Amendments to the Weapons Act (654 SE), initiated by the National Defence Committee, will bring the Act into conformity with the relevant EU directive amending the relevant Council Directive on control of the acquisition and possession of weapons (Firearms Directive).

The Bill will include into the scope of application of the Act alarm and signal weapons and acoustic weapons with regard to which no rules have been established so far. The planned amendments will allow to handle, incl. to manufacture and repair, such weapons also in Estonia in accordance with the requirements in force in the EU. Uniform technical specifications for such weapons will be established in the EU as of September 2018. Uniform requirements for marking firearms and their parts will also be established in the EU. In order that Estonian undertakings could also manufacture weapons or sell them with proper marking, it is important to amend the Act by adding the relevant regulation. The Bill will specify the requirements for the marking of firearms, their essential components and ammunition. As of 14 September 2018, besides the national requirements, the technical specifications established by the European Commission have to be taken into account when marking firearms placed on the market, their essential components and ammunition.

The committee introduced a number of amendments into the Bill during the second reading. The Bill was amended by adding a provision under which the holder of a weapons permit will no longer have to take a new examination in order to acquire or own an acoustic weapon, gas weapon, pneumatic weapon or cut-and-thrust weapon in restricted commerce.

The Bill on Amendments to the Income Tax Act (648 SE), initiated by the Rural Affairs Committee, provides for exemption from the fringe benefit tax the expenses incurred by an employer in covering the price of a public transport ticket in the cases the employee uses public transport to commute between their place of residence and place of work. The exemption will not apply to taxi services. The explanatory memorandum states that the amendment will allow to ensure more favourable conditions to employees, and will indirectly support the continuation of commercial regular services and the functioning of the existing line network.

In the course of the second reading, the Bill was amended by adding a provision according to which the support for constructing water supply and sewerage pipelines and installing accumulation tanks on registered immovables, paid to natural persons from European Union structural funds, will no longer be subject to income tax. The provision will be implemented retroactively from 1 June 2018. 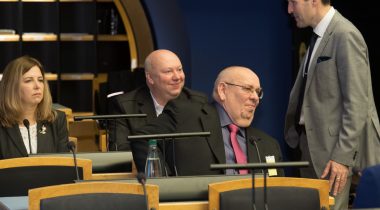