Matter of significant national importance “Life after crisis – moving on as a healthy society”, initiated by the Social Democratic Party Faction, was deliberated at the Riigikogu today.

Member of the Supervisory Board of think tank Praxis and economic expert Ardo Hansson, Deputy Secretary General of the Ministry of Social Affairs Sten Andreas Ehrlich, Member of the European Parliament Marina Kaljurand and Chairman of the Social Democratic Party Faction Indrek Saar made reports.

In the opinion of Ardo Hansson, the economy of Estonia was essentially put into an induced coma for the duration of the crisis in order to save the rest of the body from worse. “Economic damage was not caused directly by the spread of the virus, but indirectly by all the measures. The requirement of quarantine essentially meant that a great part of economic activity was temporarily frozen,” he said. Hansson believes that when we look at the forecasts for European economies, the slowdown of Estonian economy could be greater than the slowdown of, for example, Italian, French or Spanish economies.

Hansson spoke of three possible future scenarios. According to him, the first possibility is fast restoration of the old normalcy – the situation where the virus disappears, the health care crisis is solved quickly and the economy recovers. As the second scenario, the economic expert described the situation where the new normalcy was very different from the old, and it would be necessary to start adapting to permanent shock and change the economic structure. In Hansson’s opinion, the third and the most probable scenario is slow return to old normalcy, during which the measures should keep abreast with the times and instead of overall stimulation, the existing businesses should be kept alive.

The economic expert thinks that it is necessary to move from minimising the risks to managing the risks and accepting certain risks. “When there is a great shock, the first reaction is that let’s close all taps, let’s be very careful. It is a completely reasonable and justified approach. When we are back on our feet and get a little self-confidence, it is possible to start taking risks consciously, and sometimes those risks are realised,” Hansson said.

Sten Andreas Ehrlich pointed out that in only a couple of months, the unemployment rate had increased to 7.9 percent – at the beginning of this year, the number of the unemployed had been around 35,000, but today the number of registered unemployed is 49,000. He added that the unemployment rate may grow faster than during the previous crisis, the impacts of the crisis would be felt for a long time, and that in the social sector, the crisis was still ahead. “It may be assumed that the employers will not hire people back as fast as they laid them off, and probably the same phenomenon as we saw in 2010 will be repeated on the Estonian labour market. The unemployment rate grew rapidly and remained high for a very long time,” Ehrlich said. He also thinks that the impacts of the crisis will be different across Estonia, and some regions will lose more than others.

Ehrlich also underlined that, as a general rule, poverty increased during the crises and the differences on labour market became even greater. He drew attention to the fact that crises grew like snowballs: when income decreased, consumption was reduced, which in its turn reduced the income of other people. Speaking of salary compensations, Ehrlich remarked that in three months, the expenses of that measure had been 250 million euro, or more than a quarter of the reserves of the Estonian Unemployment Insurance Fund. In his opinion, this is not a cheap investment, and extending the paying of compensations deserved serious consideration.

In her report, Marina Kaljurand highlighted the importance of international cooperation and the need to coordinate the activities of the European Union member states. “March 2020 showed very clearly what our life might be like if instead of the cooperation of 27 member states, the European Union becomes a union of 27 countries acting on their own,” Kaljurand said. According to her, the activities were not coordinated between the member states at the beginning of the crisis and agreements were not observed, let it be the Schengen agreement, border control or assisting each other in crisis situations.

Kaljurand emphasised that the crisis had shown how weak the cooperation between the member states was in such a situation, and how vulnerable the common market of the European Union was. “The common market should not be a victim of the crisis, it should be a solution that connects the capabilities of the member states. The crisis can be resolved only in cooperation in the European Union and globally,” she said. Kaljurand also admitted that the European Parliament was completely different from what it had been only some months ago. She added that at the same time, the parliament had managed to come together regardless of the crisis, and passed the first legislative amendments that were necessary for fighting the epidemic.

Indrek Saar said that we had to think during the crisis what kind of Estonia we wanted to see after the crisis. “If we do not want the economic crisis to increase social gaps, it is necessary to behave wisely, see things in a longer perspective and feel responsibility for the future of Estonia,” he emphasised.

Saar thinks that as the first step, it is important to return to observing the research agreement, or to make the necessary investment into financing research and development. “Without investing into research, the structure of our economy will not change and we will remain in a standstill in regard to the productivity of our labour force,” he said, and added that in this way, the growth of welfare would also not improve, because the enterprises would not have enough innovations to keep step with the rest of the world.

In his report, Saar also spoke of support measures for companies and planning of investments that take into account the green transition. He underlined the need for a system that would provide assistance with longer perspective to people who were having problems with loans. “Home of a family with children where both parents worked in catering for tourists must not be transferred to a bank just because both parents lost their jobs and incomes,” Saar said, and acknowledged the banks of Estonia who had jointly agreed upon flexible solutions for grace period. 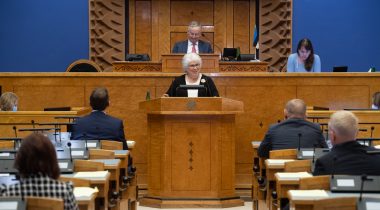