At today’s sitting of the Riigikogu, deliberation of the matter of significant national importance “Information security and the associated threats to democracy and the rule of law” was held at the initiative of the Estonian Free Party Faction. Andres Herkel, Chairman of the Estonian Free Party Faction, Ilmar Raag, strategic communication expert, Helen Eenmaa-Dimitrieva, Research Fellow in IT Law at the School of Law of the University of Tartu, and Ivo Juurvee, Research Fellow at the International Centre for Defence and Security, made reports.

In his report, Ilmar Raag said that, when analysing information, the state should ask about its potential impact on the behaviour of the people and the constitutional order. He pointed out that, according to European experts’ assessment, in the case of certain criteria, the Member States had the right to define for themselves what kind of speech or influencing activity could be criminalised or repressed in another way. “The first of them is about whether the messages or activities contain a clear call to violence, and the other one is about whether it contains operations for introducing lies into public space, carried out knowingly,” Raag explained.

Helen Eenmaa-Dimitrieva spoke of the influence of technology on legal systems. She stated that little research had been done on how datafication could serve the interests of being a citizen, and freedom and social justice, but it was indispensable. “Within the context of information security, what we need is more substantive combination of mechanisms and competition – that would be of much use. It is good to use all opportunities to develop the cooperation capacity of society and the decision-making processes,” Eenmaa-Dimitrieva said.

Ivo Juurvee spoke of the influencing activities of special services in the past and today. He said that influencing activities did not include only manipulation of big data, but influencing agents had not disappeared anywhere either, and it was simpler to use them thanks to technological development. He suggested that the problem of influence agents could be reduced to a certain extent with Acts against money laundering and Acts against defamation. “And finally, more specific regulation of lobbying is also a question that the next Riigikogu could perhaps consider,” Juurvee said.

Erki Savisaar said that the information analysis skill was paramount for ensuring security. When reading news and documents, people should think critically why and in whose interests they have been written. He added that innovative solutions should be found how to protect people against fake news and how to offer even better and more human-centered national services.

In his speech, Andres Herkel also called on to critically evaluate information sources, and stressed the importance of digital education. He extended a call to all political parties to conclude an agreement of goodwill to the effect that politicians do not write anonymous comments or use fake accounts.

Keit Pentus-Rosimannus said that greater unity was needed to counter extensive information and influencing operations of foreign countries. For that, she said, a coordinating unit should be designated who would address the issue, and where the know-how and experience of the field would be collected.

Tanel Talve noted in his speech that, when developing new e-services, more attention should be paid to security. He found that cross-party cooperation was possible in that issue, and called on the following Riigikogu to address it.

The Bill on Amendments to the Estonian Defence League Act (786 SE), initiated by Member of the Riigikogu Ants Laaneots, will specify the co-operation of the Defence League with the Defence Forces in reservist trainings, in the military defence of the country and in the preparation for the collective self-defence, and upon participation in international military cooperation. Where necessary, the Government will establish additional duties for the Defence League by an order.

The Bill on Amendments to the Police and Border Guard Act and the Rescue Service Act (768 SE), initiated by the Government, provides for a more flexible organisation of the employment in service of the Deputy Director General of the Police and Border Guard Board, and the promotion in the service rank of a police officer, and specifies the grant of the state old-age pension of rescue service workers.

Under the current procedure, old-age pension is granted to rescue service workers on the basis of the State Pension Insurance Act. In addition, the Rescue Service Act provides for an increase of 10-15 per cent in old-age pension, depending on the length of service of rescue service worker (starting from the tenth year). In practice the question has arisen as to whether a person who has the required length of rescue service but who attains pension age after 1 March 2023 would not benefit from an increase in their pension. According to the Bill, the person would retain the entitlement to the increase in old-age pension.

The general objective of the Bill on Amendments to the Penal Code and Amendments to Other Associated Acts (658 SE), initiated by the Government, is to reduce recidivism and to increase social security.

The Bill will create the possibility to impose life imprisonment on persons with recidivist past who commit manslaughter or a sexual offence again. Victims of serious crimes will be given an opportunity to express their opinion on the release of an offender on parole. The amendment aims to pay more attention to the rights of the victim and the liability of criminals.

The Bill will also create the possibility to enter into an agreement for leaving the country with an alien within the framework of settlement proceedings (except with regard to a person accused of a serious crime), which will involve prohibition on entry. 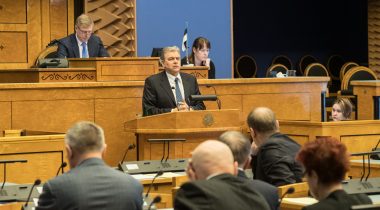