At today’s sitting, the Riigikogu deliberated “How to get the price of electricity down?” as a matter of significant national importance, at the initiative of the Estonian Conservative People’s Party Faction.

Alar Konist began from the energy consumption around the world. He said that nearly 80 percent of the consumed energy is based on fossil fuels, which include coal, gas, and oil. And although the percentage of renewable energy has been growing consistently, this has not met the expectations by any means. Konist added that coal-fired power plants would soon be closed for good, and not because we are running out of coal but because their life cycle and working resources have exhausted themselves. So far, we have used gas as an alternative to coal, which has indeed significantly increased the usage of gas compared to coal. Since 2014, investments into oil production have fallen by nearly one half, which means that the sector can also expect a number of businesses to close down.

Konist feels that the price of energy might not have reached its ceiling yet because the production capacity and ability are constantly decreasing. He sees a need for investments to maintain the system and keep it operational. “If we fail to invest, we are first of all risking with the system shutting down, and secondly, of course, with prices becoming even more volatile,” said Konist, adding that this was one of the biggest future challenges.

Konist also mentioned that the bulk of the gas we consume comes from Russia, and if we were to start using more liquefied natural gas, this could be imported from the US, for example. He sees it very risky that we treat gas as our transitional fuel and are using it in increased quantities, because this forces us into dependency from other countries outside the European Union.

In addition to contributing towards renewable energy, we also need to invest into production capabilities that we can manage according to our needs, because wind and sun farms cannot always deliver or keep the system robust. Konist referred to the Nordic countries which use nuclear, hydro, and thermal power stations, the latter working largely on fossil fuels. “In order to maintain the quality of the network, we need all the energy production methods,” he said. Considering the current increasing CO2 quota charges, the feasibility of applying hydrogen technology also increases with every passing day, which would allow us to achieve climate neutrality with oil shale as well, and would keep all the production methods in our toolbox for decisions in the future.

Konist concluded with a proposal to differentiate the network fees on the basis of the method of production. He admitted that meeting our climate ambitions was resource-heavy and costly, and our future would be beleaguered by price fluctuations unless we contribute towards capabilities that we can manage.

Arvi Hamburg started with the reminder that despite our one hundred years of experience in using oil shale for power generation, we have become an electricity importer today.

Hamburg does not believe that the prices of electricity and gas would ever drop to the earlier levels; instead, these would remain 2–2.5 times higher than last year. “All the talk about the cold winter passing and wind starting to blow again, the sun starting to shine and the weather getting nice is well enough, but not what we can expect in reality,” he said.

Hamburg also gave examples of price increase impacting the consumer. He described household consumers as the most disadvantaged, with electric or gas heated private homes being hit particularly hard. The statistics say that one in ten private homes are heated with gas, and one in fifteen with electricity. For example, an electric heated private home uses an average of 1500 KWh monthly. While in September last year, the owner paid EUR 174 a month, this year they must pay EUR 322, which is a 1.85 times increase. He also gave the example of 2–3 room flats with central heating, where the end consumer price was EUR 35.5 in September last year, and EUR 63 in September this year. Hamburg added that the prices are sure to increase even further.

In energy, the key is balance. He described a triangle with supply security as one side, meaning that energy must be available at any time and in any place in the required amount. The second side is its affordability, and the third is environmental sustainability. “If we compromise the balance of this triangle, we have no grounds to blame the market because it is our political decisions that have caused the market imbalance. We have put a bit too much effort into one side of the triangle, while on another side we are facing the fact that the availability is becoming increasingly unreliable,” he said.

Hamburg also pointed out that there is no common European energy market with a common price; instead, different regions have different prices, and there is also a price difference between the Baltic states, not to mention the Nordic countries, or the continental Europe, or Central Europe.

He also touched on renewable energy charge as well as offshore and onshore wind farms; the capacity of the installed farms is 330 MW, which satisfies 25% of our energy need, so that 75% of our energy must come from somewhere else.

Thinking about the future, a cleaner climate requires more money. Hamburg suggested considering very carefully whether we are willing to pay more and whether we are willing to give up our comforts. He also sees a possible future option in circular economy in the oil shale industry, beginning with the use of ash, crushed stone, and ending with the chemical industry. He did not see closing businesses or top-down orders having much climate impact; it is technology that would take us forward. In his opinion, the future lies in combined power generation, i.e. energy mix. He also talked about the four Ds in electric energy – decarbonisation, decentralisation, desynchronisation, and digitalisation.

He concluded his presentation with a number of suggestions. The government should stand by the consumer and abandon the renewable energy charge. This would be covered from the price of the CO2 quota, which has increased. Secondly, he suggested reducing the VAT. For example, from 20% to 9%, which would reduce the end bill for the consumer by 11%. The cost of this alleviation would be covered from the same VAT, which we actually receive more thanks to the higher price of electricity. Hamburg also suggested reviewing the decision to close down oil shale power generation.

Hamburg emphasised the importance of research in the energy economy, the differentiation of network fees according to the energy production structure, developing compensation mechanisms, and extending the emissions trade system. He also touched on the life cycle of wind turbines and solar panels, and the European solidarity which should be better regulated to support any countries in crisis.

Martin Helme started with an admonition to base everything on discussions with the voters concerning the meaning of the climate transition or climate policy, and its implications on their standards of living. He said that the global climate has been changing since the beginning of time. According to Helme, the climate has been considerably warmer before the birth of humankind and considerably colder before the birth of humankind than it is now, and this has had nothing to do with burning oil shale in Narva. He added that the global climate is primarily affected by the sun, the distance and the angle between the Earth and the sun, the level of activity of the sun, and the geological processes inside the Earth as a consequence of this activity. This is why Helme considers it easier to adapt to the climate change rather than fight it.

Helme does not see the European CO2 policy as having any effect on the climate; however, it does have clear economic and socio-economic effects. He views carbon trading as damaging and something that needs to stop. Estonia must abandon it.

Helme sees the transition to wind and sun energy leading to colossal investments into the network, and yet the price of electricity would remain two to three times higher than today. “Renewable energy is hugely expensive and the transition to it demands massive investments and the consequent adaptation of networks demands massive investments,” Helme said. The power stations in Narva cover the needs of Estonia and have a balance volume of around EUR 2 billion.

Helme suggests discontinuing the current CO2 trade to ensure lower electricity prices in short as well as long term. Secondly, he thinks that we must stop paying the renewable energy charge as useless. “We are taking 100 million from our common pocket and giving these to around 50 or 100 businesses who have been very closely linked to drafting the legislation,” Helme said. “This has no benefits for the climate and all it does is drive up the price of electricity.”

Transmission fee could also be lowered because instead of being a cost-based price this is an investment into renewable energy networks. “If we reduce the need for these investments, the electricity transmission fees would also drop immediately,” Helme said.

Helme commended the decision of the government to keep the excise duties on electricity and gas low. He also sees the sense in reducing the energy VAT to 9%. He believes that the price of electricity would immediately reach a reasonable level as soon as we take the above administrative and political steps.

Helme concluded with a suggestion to have only an open internal market in Estonia. “For anything abroad, we buy and sell electricity through a state-owned export/import agency which holds the monopoly and which either buys up the market surplus in Estonia and sells this abroad, or buys from abroad and sells on the Estonian market at a fixed price, as the government decides,” Helme described his proposal. “In this case, electricity in Estonia would cost as much as when produced from oil shale, which would mean a considerable drop in price.” 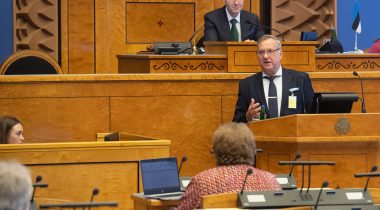