At the sitting of the Riigikogu, the Minister of Finance Sven Sester made an overview of the State Budget for 2016 Bill (103 SE), initiated by the Government.

The volume of the next year’s budget is 8.9 billion euro. It is 4.2 percent or 358 million euro larger than was planned in the state budget for 2015.

The draft state budget has been drafted so that the budget position of the state in 2016 is in structural surplus as the basic State Budget Act requires. It is in compliance with the financial and economic policy objectives of the state. The expenditure planned is affordable for the state and is covered by revenues, when looking into the future.

According to the summer forecast of the Ministry of Finance, the real growth of the Estonian economy, that is, gross national product, will accelerate to 2.6% next year, from the 1.7 % of the current year. A more important indicator in terms of the receipt of tax revenues is the growth of GDP in running prices that also takes into account inflation. Thus, together with price rise, the growth of GDP will reach 3.1% in 2015 and accelerate to 5.5% in 2016. A precondition for accelerating the economic growth of Estonia is recovery of the increase in foreign demand for our export goods, Sester explained. He noted that, according to the forecast, 5.3% more tax revenue will be received in the state budget in 2016 than a year earlier.

Sester pointed out a number of important costs in the coming year’s budget. The Ministry of Social Affairs who is responsible for pensions and health insurance will receive the greatest share. Social insurance benefits account for approximately two billion euro in total; of that, state pensions account for 1.66 billion euro. Growth will be 89 million euro, and the state support to mandatory funded pension funds will be 304 million euro. Again, growth will be 34 million euro next year compared to this year. This will ensure a pension increase of 5.7% as of 1 April, so that the average pension will be 395 euro next year.

The budget prescribes increasing the basic exemption to 170 euro, child benefit to 50 euro, and to 100 euro for families with three and more children next year. The budget provides for a 4 percent rise in the salary fund of teachers, culture workers and social workers, police officers and other internal security officers.

For three and a half hours, Sester answered questions of clarification on the coming year’s budget from members of the Riigikogu. The MPs asked about the justification of the optimism of the budget, economic growth, the justification of revenues and expenditure, teachers’ salaries, problems relating to the decrease of labour force, the supporting of agriculture, the revenue base of local governments, and several other issues in the budget.

The Chairman of the Finance Committee Remo Holsmer gave an overview of the discussions that had been held in the Committee with the ministers of relevant areas. These meetings will continue this week. In Holsmer’s opinion, the meetings with ministers had been constructive. In the grand scheme they are satisfied with the allocation of the budget funds. The next year’s budget is nearly balanced, which is 0.1 percent of GDP. However, the structural position will remain in surplus, which is 0.6 percent of GDP.

The deliberation of the coming year’s state budget was adjourned due to the end of the working hours of the sitting. At tomorrow’s sitting, there will be a debate with the participation of representatives of factions.

The first reading of the Bill on Amendments to the Work Ability Allowance Act and Amendments to Other Associated Acts (84 SE), initiated by the Government, will take place at tomorrow’s sitting.

Photos of the sitting: https://fotoalbum.riigikogu.ee/v/Riigikogu/XIII+Riigikogu/20102015/ 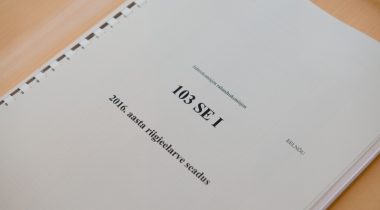