At today’s plenary sitting, the Riigikogu passed the Act that harmonises the conditions for control of the acquisition and possession of weapons in the European Union.

The Act on Amendments to the Weapons Act, the State Fees Act and the Strategic Goods Act (transposition of the Firearms Directive) (62 SE), initiated by the Government, transposes the Directive of the European Parliament and of the Council which updates the requirements for the free movement of firearms and their essential components within the European Union. Compared to the regulation that was in force before, the requirements for travelling with weapons and deactivated weapons in the European Union territory will change.

In the future, for example, it will not be possible to travel with category B hunting weapons on the basis of a firearms pass. This will be subject to a prior authorisation from the destination country each time, and a one-off authorisation from the Police and Border Guard Board will be needed to take a weapon out of Estonia. The majority of hunting weapons registered in Estonia are in category C, and they can still be conveyed on the basis of a firearms pass within the European Union. Persons who wish to travel with deactivated weapons will also be required to apply for a relevant consent of a public authority. The procedure for conveying ammunition within the European Union will also change.

The Act establishes heightened requirements for owning and possessing semi-automatic firearms with large-capacity magazines using centre-fire cartridges. Persons applying for acquisition of firearms with such magazines need to provide proof that they are actively practising for or participating in shooting competitions. A person who has been a member of a shooting sports club for at least 12 months can acquire a weapon. Acquisition of such semi-automatic firearms for the purpose of self-protection and protection of property is prohibited by law.

The requirements for the collection of weapons also change. Collections may be established for historical, cultural, research, technological, educational and cultural heritage purposes on the basis of a collection permit for weapons and cartridges issued by the Police and Border Guard Board in the cases when the ownership of the weapon does not endanger national security or public order. The period of validity of a collection permit is reduced from ten to five years, and limits are set on firearms which are capable of firing and ammunition that are collected.

In the course of the proceedings on the Bill, the definition of museum was included in the Weapons Act. The adoption of the new term is necessary in order to make a distinction between authorities that maintain weapons collections under the Museums Act, and persons who collect weapons under the Weapons Act. According to the definition, museums may acquire, preserve, research and exhibit weapons, essential components of firearms, magazines in restricted commerce, and ammunition for historical, cultural, research, technological, educational, cultural heritage or entertainment purposes. Military weapons and deactivated or demilitarised weapons may also belong to weapons collections of museums, besides weapons in restricted commerce. Private museums that own weapons will also be able to join the database of museums. The Act is intended to preclude situations where persons who own weapons for the purpose of preserving history are not under state supervision.

In addition, the Act was amended by adding the definition of person participating in national defence, who may be active serviceman within the meaning of the Military Service Act. It also includes active members of the Estonian Defence League and members of national defence representative organisations when they are appointed to wartime positions. Such persons are the first to be called up for military service in a crisis situation or a situation of war. Therefore they are also allowed to engage in shooting training more efficiently with their personal weapons with larger magazines, and to train themselves voluntarily for participation in military national defence.

84 members of the Riigikogu voted in favour of the passage of the Act and one was against. 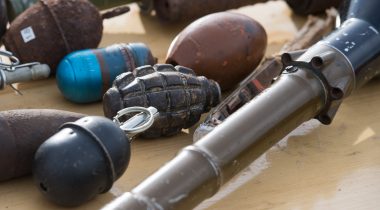