The Statement of the Riigikogu is motivated by the provocative statements by the authorities of the Russian Federation relating to the outbreak of World War II, their falsification of historical facts in the interests of their super nation ideology, and the aggressive media campaigns organised for that purpose. By justifying the Molotov-Ribbentrop Pact and its secret protocols, the Russian Federation is gaining ground to continue its aggressive foreign policy towards its neighbouring countries and the whole Western world.

The Statement of the Riigikogu condemns the attempts of the authorities of the Russian Federation at rewriting history and at justifying the Treaty of Non-Aggression and its secret protocols concluded between the Communist Soviet Union and National Socialist Germany ahead of World War II. At the same time, they are trying to show the Western countries, in particular Poland who had been divided between the two aggressors by a secret protocol to the Molotov–Ribbentrop Pact, as the main culprits in the outbreak of the war.

The Statement of the Riigikogu calls on the Government of the Republic to support the preservation of authentic historical memory, and emphasises that topics discussing the crimes of totalitarian regimes and the threats that have endangered democracy need to be included in the study programmes of Estonian schools.

The Statement recalls the Statement of the Riigikogu approved on 14 February 2012 which condemned the repressive politics of the Soviet Union and National Socialist Germany, and the activities of the persons who have committed crimes against humanity in the service of these regimes, regardless of their citizenship and the location of commission of the crime.

Four Bills passed the first reading in the Riigikogu:

The Bill on Amendments to the Auditors Activities Act, the Financial Crisis Prevention and Resolution Act and Other Acts (reform of punishments for misdemeanours in the financial sector, sanctions arising from EU law) (111 SE), initiated by the Government, will bring the upper limits of sanctions in the financial sector in line with EU law. The Bill will amend the upper limits for the fines in the financial sector and the bases for calculating thereof. The Bill is connected with the Bill on Amendments to the Penal Code (94 SE) which is in the legislative proceedings of the Riigikogu which will create the basis for providing for higher-rate sanctions. Under the current law, in most cases it is possible to impose a fine of up to 32 000 euro, and in certain cases up to 400 000 euro on a financial institution, and up to 300 fine units (1200 euro) on a natural person. Today’s upper limits for fines fail to fulfil the objectives provided for in EU law.

In certain cases, however, the EU law also provides for even greater sanctions. For example, the Bill provides for a fine of up to 10 million euro (up to 32 000 under the current law) for an issuer who is in breach of the obligation to provide information relating to voting rights and alteration of the amount of capital. Even a fine of up to 20 million (up to 400,000 euro under the current law) will be provided for infringement of the requirements of the EU Regulation on improving securities settlement and on central securities depositories.

The Bill on Amendments to the Rural Development and Agricultural Market Regulation Act and the Labour Market Services and Benefits Act (124 SE), initiated by the Government, will provide the possibility for Estonian farmers to obtain agricultural de minims aid to the maximum extent permissible by European Union law, that is, 25 000 euro instead of the current 20 000 euro. The aim is also that the Estonian state would be able to use the maximum possible total amount of agricultural de minimis aid, that is, 13.7 million euro instead of the current 11.4 million euro per three fiscal years. It will be possible for undertakings to check the outstanding balance of de minimis aid against the state aid and de minimis aid register that is accessible on the website of the Ministry of Finance.

The explanatory memorandum notes that, due to its relatively simple rules, agricultural de minimis aid is often the most appropriate legal option in granting aid for example in situations where the EU’s state aid rules provide for no possibilities to grant aid or it is administratively too complex or costly to apply payment of the aid as state aid. The main limitation in the case of de minimis aid is that the granting of aid is connected with the ceiling up to which a farmer may be supported which is determined by EU law. In addition, a ceiling has also been laid down for the total amount of agricultural de minimis aid granted to a Member State.

In March 2019, the EU Regulation on agricultural de minimis aid entered into force, as a result of which the agricultural de minimis aid ceiling per undertaking increased from the earlier 15,000 euro to 20,000 euro, and the ceiling laid down for the Estonian state increased from the earlier 8 110 000 euro to 11 375 375 euro. Both of these are the ceilings for three years. These higher rates entered into force as directly applicable on the basis of EU law.

However, the EU Regulation gives the Member States an additional opportunity to further increase the ceiling for undertakings and the national cap – the ceiling for undertakings to 25,000 euro and the national cap to 13 650 450 euro per three years. In European Union law, the application of these higher limits has however been left for the Member States to be decided, and the application brings about two additional obligations for the Member States. First, as a new requirement, it will have to be monitored that the amount of aid granted to a products sector would not exceed a half of the national cap, that is, a product sector cap will apply. Second, it will have to be ensured that account on all the ceilings is kept in a national central register.

Under the Bill on Amendments to the Liquid Fuel Stocks Act (133 SE), initiated by the Government, in the future, during the first six months of a calendar year, the compulsory liquid fuel stocks will be calculated on the basis of the data for the last year but one before the calendar year in question. Earlier, such calculation method could be applied only during the first three months of a calendar year. As a general rule, the compulsory liquid fuel stocks are calculated on the basis of the quantities imported or consumed during the previous calendar year. In addition, references to European Union law will be specified in the Act. The Bill will transpose a European Commission implementing directive.

Amendments will be made to the Courts Act so that it would be possible for judges to stand as candidates for the positions of European Prosecutors and European Delegated Prosecutors. The amendments proceed from the current principle according to which the authority and service relationship of a judge are suspended when the judge assumes office as a judge at an international court institution or a post equivalent thereto.

The EPPO is established with the aim of ensuring more efficient proceedings on criminal offences affecting the financial interests of the Union, and ensuring that criminal proceedings are not affected by the departmental or political interests or goals of a Member State. 22 Member States have officially joined the EPPO by now. The European Commission has promised that the EPPO will start operating at the end of 2020. 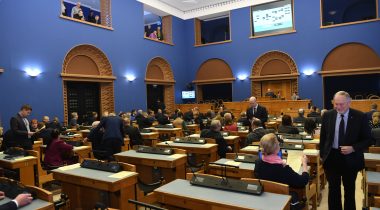