“The European Union, just like all political projects, is constantly developing. It is not perfect, but it is the best form of cooperation between countries that we have,” the Prime Minister said in the overview of the activities of the Government of the Republic in implementing European Union policies.

When speaking of Brexit, Rõivas said that the decision of the Brits to leave the European Union had been like a cold shower for both Europe and the United Kingdom. However, the head of Government said that cooperation of 27 European Union Member States and result-oriented activities will be the focus in the near future, and only then will we need to deal with Brexit negotiations.

Second, he said, cooperation with the United Kingdom will have to be improved through multilateral organisations, such as NATO, as well as regionally and in bilateral relations.

In addition to the above, the Prime Minister said, Brits’ leaving will mean that an influential Member State who often shares our views will leave. This in turn means that cooperation between similarly minded Member States will become even more important when the spokesperson has left.

In his speech, Rõivas touched upon the discussion on the trade agreements concluded between the European Union and third countries. He noted that Estonia has gained very much from free trade, and the future will have to be based on the ability to create, manufacture and export science-intensive services and products.

At the same time, freedom or free trade do not mean freedom from rules, or anarchy, he said. “On the contrary, we have to ensure that world trade would be based on rules and would adhere to rules, and at the same time would respect fair competition,” Rõivas said.

The Prime Minister expressed his delight that, as a result of years of hard work, Estonia has an image of a successful and dignified digital state. “This is the reason why we as a digital state have proposed that the free movement of data could be a separate fundamental freedom in the European Union in the future,” Rõivas said.

When speaking of the security of Europe, Rõivas attached importance to cooperation and agreements with third countries, and a change of attitude in the European Union, that would enable to implement all political measures and means to manage the migration crisis. “In the migration crisis we understood directly that the security of the European countries is very closely intertwined,” Rõivas said.

In the field of defence, Rõivas highlighted that the developments in Europe are well in accordance with Estonia’s aspirations so far. He said that the creation of a European army is not on the table today, and Estonia should not waste time on discussing it. He recalled that NATO does not have an army either, but the Member States do.

The head of Government said that Estonia should not be allergic to the development of the topic of European defence, by just holding the opinion that “it should not duplicate NATO”. “Indeed, we should not fragment our efforts, but we should look at it as an opportunity, because it is possible to find aspects where European Union can add value to the existing efforts,” he said. The understanding that we must cooperate more in defence issues is undoubtedly one of the important consequences of Brexit, he said.

The Prime Minister also spoke about connections, energy security, and the ongoing conflict in Ukraine and Syria. He also touched upon Estonia’s presidency of the Council of the European Union. In his words, the fact that Estonia was ready to pick up the baton of presidency dropped by the Brits is a good example of the willingness to cooperate and of leadership.

In Palling’s words, today we find ourselves in a situation where increasingly more political powers across Europe try to gain cheap popularity with slogans claiming that the idea of the European Union has passed its “best before” date. He emphasised that a strong, unified and cooperative Europe was, is and will be in the interests of Estonia.

In his report, Palling touched upon the principle of the free movement of data and digital platforms that could increase Europe’s competitive advantages. Palling said that technological development can never be too rapid, but countries can be too slow in implementing them. Keeping up with the changes is the key to our competitiveness, he said. In Palling’s words, Estonia could be a beacon for other countries in the issues of the single digital market and collaborative economy.

Palling also touched upon the relations between the European Union and Russia, and the Eastern Partnership. These issues will also be in the forefront during the Estonian presidency of the Council of the European Union, which will begin in June 2017.

In Palling’s words, it is important that the elimination of the sanctions that have already been imposed on Russia be not decided upon based on “gut feeling” or coffee grounds, but it must correspond to both the actual situation and the conditions behind the sanctions. “Since the economic impact of the latter is manifested only in a longer perspective, Europe needs strategic patience in this issue,” Palling said. The sanctions are not a private interest of Estonia or the Eastern Europe, but a litmus test of the strength of the principles of the European Union.”

With the Eastern Partnership countries, in Palling’s words, it is necessary to continue to maintain the position that requirements must be met and promises must be kept. He referred to visa waiver with Georgia, and the Ukraine association agreement.

When speaking of the migration crisis, Palling mentioned the programme of foreign investments directed to Africa and the neighbourhood which, by enlivening the local economies, would avoid a life threatening journey to Europe for many possible economic migrants, and would be a step towards addressing the root causes of migration, in addition to crisis measures.

In his report, Palling also paid attention to Brexit and the discussion about the future of Europe after it, and European defence cooperation and economic security.

In his speech, Novikov said that Estonia has undoubtedly benefited greatly from membership of the European Union, but at the same time Estonia is increasingly more dependent on the decisions that are made somewhere outside Estonia or are made with a presumption that partners expect solidarity in advance.

At the end of her speech, Haukanõmm stressed that the history, geographical location and interests of Estonia show that a functioning European Union is the guarantee of our freedom, development and security, but our relations with the EU must be balanced, keeping in mind Estonia’s interests, and not giving up our rights.

Madison stated in conclusion that a federalising European Union is the greatest threat to the nation state of Estonia, and the best insurance policy, he said, is close relations above all with the Southern and Northern neighbours, as well as the Great Britain.

Urve Tiidus spoke on behalf of the Reform Party Faction and said that, owing to a long period of stability and peace in Europe, as recently as some years ago the prevailing mood was that, despite the financial crisis, life is getting better little by little. She said that recent times have forced us to radically review these understandings, and to find new solutions, although it is not always easy. She stressed that stability and peace around us is a normal expectation for which no effort is in vain.

Sven Mikser spoke on behalf of the Social Democratic Party Faction and said that the European Union has never in any of its aspects threatened or endangered the sovereignty of Estonia or the national independence of Estonia. The European Union, and Estonia’s membership in this Union, has, however, strengthened and secured the sovereignty of Estonia, and will continue to do so in the future.

The Riigikogu concluded the first reading of the Bill on Amendments to the Universities Act, the Institutions of Professional Higher Education Act and Other Acts (295 SE), initiated by the Government. The Bill will change the scheme for the funding of higher education in which the quality of teaching and the feedback from the labour market will be taken into account. The financing of institutions of higher education will become more stable, and reporting will be reduced.

The first reading of the Bill on Amendments to the Electricity Market Act, the Law of Property Act and the Building Code (270 SE), initiated by members of the Riigikogu Mihhail Stalnuhhin, Andres Ammas, Henn Põlluaas, Andres Metsoja, Tanel Talve and Kristjan Kõljalg, was adjourned today due to the end of the working hours of the sitting.

The deliberation of the Bill on Amendments to the State Legal Aid Act and Other Acts (299 SE), initiated by the Government, and the Bill on Amendments to the Permanently Inhabited Small Islands Act (254 SE), initiated by members of the Riigikogu Johannes Kert, Imre Sooäär, Raivo Aeg, Kalev Kotkas, Mark Soosaar and Jüri Adams, will also be included in the agenda for tomorrow’s sitting. 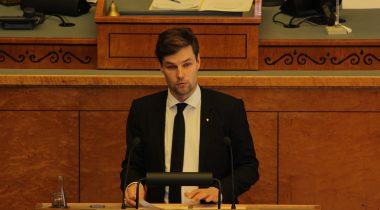