At today’s sitting, the Riigikogu discussed the proposal of the Chancellor of Justice Ülle Madise to deprive Kalev Kallo of deputy immunity and to continue the pending court proceedings concerning him.

In her report, Ülle Madise said that making the proposal and the potential depriving of immunity did not mean that the member of the Riigikogu was convicted of a criminal offence, nor did that suspend the member’s mandate.

The Chancellor of Justice also presented the content of the charges brought against Kallo.

Kalev Kallo made a speech.

52 members of the Riigikogu voted in favour of depriving Kalev Kallo of deputy immunity.

The Riigikogu passed a Resolution:

Chief Justice of the Supreme Court Villu Kõve noted in his cover letter that Kaupo Paal was an experienced and recognised lawyer whose life and professional experience allowed him to contribute significantly to the work of the Civil Chamber of the Supreme Court and the further development of Estonian civil law. He has been a member of the academic staff of the School of Law of the University of Tartu, where he was in charge of carrying out instruction in the subject “property law”, compulsory in the basic studies. As a training provider, he has conducted several trainings for judges and court officers, lawyers and prosecutors, organised by the Estonian Law Centre Foundation and the Legal Information and Judicial Training Department of the Supreme Court. Paal has published several scientific articles in the field of civil law. He is also a contributing author of the annotated editions of the Code of Civil Procedure, the Law of Property Act, the General Part of the Civil Code Act, and the Law of Obligations Act.

In 2007, the President of the Republic appointed Kaupo Paal a judge of court of the first instance and he started work in Harju County Court. In 2009, Paal began work in the Civil Chamber of Tallinn Circuit Court.

Kaupo Paal made a speech and answered questions from members of the Riigikogu.

76 members of the Riigikogu voted in favour of the passage of the Resolution. 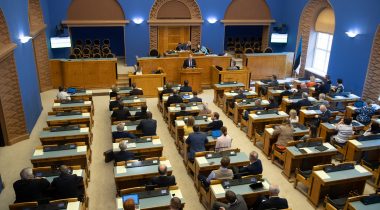