At its today’s sitting, the Riigikogu heard replies to three interpellations.

Members of the Riigikogu Raivo Tamm, Heiki Hepner, Andres Metsoja, Üllar Saaremäe, Priit Sibul, Helir-Valdor Seeder, Mihhail Lotman and Urmas Reinsalu had submitted an interpellation concerning the moving of posts of the Ministry of Education and Research (No. 101).

The interpellators referred to the fact that at the time the Government was planning taking the jobs in state agencies from the capital Tallinn to other centres in Estonia, the leadership of the Ministry of Education and Research was moving its jobs from Tartu back to Tallinn.

The interpellators wanted to know whether there was an integrated plan that would explain the moving of the jobs in the Ministry to Tallinn.

Minister of Education and Research Liina Kersna said that during the whole year she had been in office, she had never thought of doing that. She assured that there was no such action plan. “I have never given such a task that we should do it. Nobody has had such a plan, because it makes no sense,” the Minister said. “It is our strength that we can offer jobs also to people living in South Estonia, so that these specialists have the possibility to apply for a job and to work in Tartu.”

Kersna said that she was convinced that the sphere of education had benefited very much from having the head office in Tartu and a branch office in Tallinn. There are many experts of education in Tartu, 163 specialists work there. “However, the COVID period showed us very clearly that nowadays the location of a physical workplace is not important any more. What is important is the possibility to work from any place. For example, one competition for a post was won by a person from Kiviõli, and they work in Kiviõli,” the Minister explained. That person goes to both Tallinn and Tartu, and works very efficiently. The Ministry of Education and Research is unique because already before COVID, work was done there via a video bridge. This was their normal life, but other ministries are only getting used to it due to COVID.

Kersna said that there were many education specialists in Tartu who could contribute to the organisation of education. The Minister gave examples about job competitions in 2021. “Altogether, there were nine competitions for managerial positions and five of them were won by people from Tartu,” the Minister said. For example, the Head of General Education Policy Department is from Tartu, the Head of Hobby Education is from Tartu, the Head of General Administration Department is from Tartu, the Quality Manager is from Tartu. “So that it is not true that people from Tartu have not been hired,” Kersna explained. She added that one of those nine competitions, the competition for the position of the Head of Communications, was still under way. “I know that there is a great specialist in the University of Tartu, who has also taught me and who has strong connections with the field of education as well. I would have very much wanted that specialist to participate in the competition, but that specialist preferred an academic career,” the Minister said. Kersna admitted that it was hard to get very good specialists to apply for a position in Tartu because they were usually satisfied with their current employers and their colleagues.

“In my opinion, being in two cities works well, and it has actually given the Ministry of Education and Research a competitive advantage and we appeal to the people in South Estonia clearly more than, for example, the Ministry of Economic Affairs and Communications, which does not have such a basis. There is no doubt that our main office is in Tartu,” Kersna underlined.

Minister for Economy and Infrastructure Taavi Aas replied to the interpellations concerning the problems in Estonian maritime affairs (No. 91) and the sanitary situation in Elron trains (No. 94).

During the open microphone, Heiki Hepner and Hele Everaus took the floor. 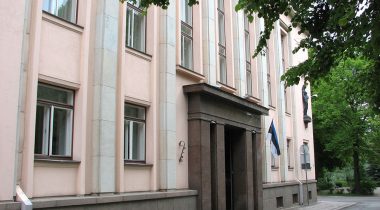