With the Bill that passed the second reading in the Riigikogu today, the relevant rules of the road and the requirements for the use of electric scooters and other light electric vehicles will be established in the interests of the safety of the use of such vehicles and the safety of road users.

With the Bill on Amendments to the Traffic Act (191 SE), a new category of vehicles will be implemented, personal transporter, which covers various vehicles intended for carrying one person and powered by electricity, for example, electric kick scooters, electric skateboards, self-balancing transporters and other similar vehicles without seating. The Bill provides that personal transporters will be permitted to drive in particular in the environment intended for pedestrians and cyclists, and on the carriageway in exceptional cases. The requirements for crossing the carriageway and the obligations to give way, and the obligations of the driver of personal transporter in ensuring safety will also be regulated. The maximum speed for personal transporter will be established at 25 km/h, and in close proximity to pedestrians, it will have to drive at a speed not endangering pedestrians.

The requirements concerning cyclists and drivers of mini mopeds and mopeds, in particular the issues relating to their location on the road and their obligation to give way will be additionally specified.

The Bill also contains a transitional provision under which persons who, before the entry into force of the Act, will have procured a personal transporter with a maximum design speed exceeding 25 km/h will be able to continue to use it in the case when the speed limit for personal transporters will be set at 25 kilometres per hour.

The motions to amend approved today specify, among other things, the safe passing of pedestrians, the obligations in the event of restricted visibility, and the safety requirements in buses used for occasional carriage of children on roads outside built-up areas.

During the debate, Raimond Kaljulaid and Jevgeni Ossinovski took the floor.

The Bill on the Ratification of the Investment Protection Agreement between the European Union and Its Member States, of the one part, and the Socialist Republic of Viet Nam, of the other part (246 SE), initiated by the Government, aims to improve investment conditions between the European Union and Vietnam. The agreement will benefit European investors, ensuring the protection of high-level investments in Vietnam, at the same time reserving the parties the right to regulate the sector and to establish legal provisions.

An investment tribunal system will be established, which has been developed to ensure the protection of the rights of citizens through transparent and independent resolution of investment disputes.

The Bill on Amendments to the Aliens Act, the Higher Education Act and the Study Allowances and Study Loans Act (241 SE), initiated by the Government, will organise the regulation for working in Estonia for aliens and the conditions for staying, studying and settling in Estonia for aliens, taking into account the constantly changing environment and the new needs arising therefrom and also keeping in mind the objectives set out in various national development plans.

The Bill is proposing the following changes to the regulation for working in Estonia: to allow short-term employment for aliens only on the basis of a long-stay visa (D-visa) and to have restrictions on the grant of visa on the same conditions to family members of aliens working for a short term; to establish the remuneration requirements for short-term employment as seasonal worker; to establish the requirement that aliens who work in Estonia must be employed full-time.

The following changes to the regulation for studying in Estonia are proposed: to have restrictions on the grant of long-stay visa to family members of aliens studying or working for a short term in Estonia; to specify the requirements set for the higher education institutions inviting aliens to study; to terminate the payment of the needs-based study allowance to aliens who receive a temporary residence permit for studies; to establish additional requirements for granting a residence permit to the spouse of an alien who receives a temporary residence permit for studies; to reorganise the conditions for settling permanently in Estonia for aliens who settle in Estonia for study purposes and complete their studies.

The explanatory memorandum notes that the aim of Estonia’s immigration policy is, on the one hand, to facilitate settlement in Estonia for aliens who bring greater added value to the whole society, and on the other hand to avoid abuse of residence permits and visas and illegal immigration.

The Bill on Amendments to the Feed Act (225 SE), initiated by the Government, will repeal and amend provisions that have transposed the directive regulating feed intended for particular nutritional purposes in order to avoid repetition of the provisions of European Union law. Starting from 25 December this year, a European Union Regulation will apply to the list of intended uses of feed intended for particular nutritional purposes and the modes of use necessary to achieve them. The provisions of the Bill and the provisions of the current Act do not differ in terms of content. The amendments are of a technical nature – references to the directly applicable Regulation will be included. The amendments will involve no new obligations for feed business operators or supervisory officials.

The Act is planned to enter into force from 25 December 2020 because the European Union Regulation will have to be applied starting from this date.

The purpose of the Bill on Amendments to the Animal Protection Act and the Bankruptcy Act (226 SE), initiated by the Government, is to protect the life and health of animals in the case when the obligations of an animal keeper need to be taken over from him or her because of his or her activities. These are rare cases, for example, when an animal keeper is facing bankruptcy and he or she is no longer able to take care of animals. Under the current procedure, the local government must take over the obligation to keep animals. Under the amendment to the Act, this task will be given to the Veterinary and Food Board from 2021, and the necessary funds will be provided in its budget.

The expenses incurred by the state in such situations will be collected from the animal keeper from whom the obligation to keep the animal in compliance with the requirements is overtaken. This amendment will be applied in respect of all animals: farm animals as well as pet animals, circus, experimental and zoo animals and other animals. The amendment does not concern stray animals. 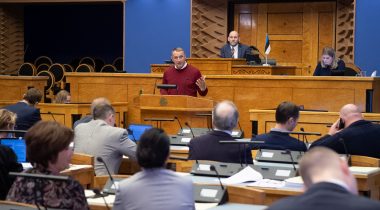