The Riigikogu approved its agenda for this working week, which includes 13 items.

No deliberation of Bills or replies to interpellations have been scheduled for Monday’s sitting.

At Thursday’s sitting, the matter of significant national importance “New generation of teachers and valuing of teacher’s profession as a mainstay of the sustainability of the state of Estonia” will be deliberated. Aadu Must, Chairman of the Cultural Affairs Committee; Madis Somelar, Chairman of the Board of the Estonian History and Civics Teachers Association, coordinator of the network of subject teachers, and teacher, class teacher and Director of Studies at Tallinn Secondary School of Science; Professor Margus Pedaste, Head of Pedagogicum at the University of Tartu; and Mailis Reps, Minister of Education and Research, will make reports.

The new Minister of the Environment Rain Epler took his oath of office before the Riigikogu. 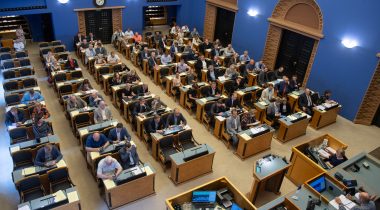