In the political statement made at the extraordinary session of the Riigikogu (Parliament of Estonia), Prime Minister Taavi Rõivas focused on foreign policy and topical issues. Rõivas spoke about the situation in Greece and East Ukraine, solving of the Mediterranean refugee crisis, guaranteeing of the security of the state and the activities of the Government.

The Prime Minister said that the situation calls for Greece to make reforms and budget cuts. “We are discussing the prospect of a new reform plan and support package here today only because the Greek government decided to turn back from the brink of abyss and clearly stated that they wish to continue in the euro area, and promised to do everything that is required for that. Yesterday Greece managed to reach the first milestone, when its parliament, with the support of three fourths of deputies, passed the first acts necessary for starting negotiations, and in the coming days they have to get to the next acts,” Rõivas said, and added that this is the first urgent step taken by Greece to restore trust.

In the opinion of Rõivas, the financial damage to Estonia if Greece left the euro area could be measured in hundreds of millions of euro, and such a decision would have a negative impact on the security of Estonia. “If Europe turns its back on each other’s problems, turns against each other, then the independence of Estonia here on the brink of the Western world would be among the first victims,” Rõivas said.

The Prime Minister thinks that the solving of the Mediterranean refugee crisis should be based on the proportional distribution of the persons in need of protection according to the size of countries, which is also the model suggested by Estonia and approved in the European Union Affairs Committee unanimously by the representatives of all factions of the Riigikogu. “I believe that Estonia will be able to receive these two hundred people in a couple of years without any hysterics or panic. The Ministry of Internal Affairs and the Ministry of Social Affairs are preparing an action plan in order to be ready for integrating the people coming to Estonia and helping them find work,” Rõivas said.

Rõivas expressed concern that in the immediate vicinity of the borders of Estonia, in East Ukraine, a war has been going on for more than a year and a half. “Although it may seem to some that the behaviour of Russia is the new normal, Estonia has the moral obligation to demand that Europe continues with sanctions until Russia has fulfilled all international agreements. Or until Crimea has been returned to Ukraine,” Rõivas said.

The Prime Minister assured that the security of Estonia continues to be the firm priority of the government led by him. “Our national defence will never be ready, we will continue strengthening it at home and in cooperation with our allies,” Rõivas said.

Regarding the activities of the Government, Rõivas mentioned the increasing of pensions and child allowances and subsistence benefits from the next year, lowering of the tax burden of working people and pensioners, the plans for establishing single pensioners support measure and maintenance allowance fund for single parents, the administrative reform and the work capacity reform.

Kadri Simson, Martin Helme and Andres Herkel, who spoke in the name of the opposition parties at the debate, criticised the activities of the Government during its first 100 days in office. Priit Sibul and Jevgeni Ossinovski, who spoke on behalf of the coalition parties, focused on the economic situation of Greece.

At the beginning of the sitting, the new Minister of Foreign Affairs Marina Kaljurand took the oath of office before the Riigikogu. 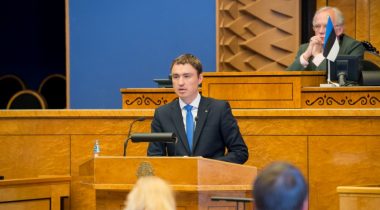