Under the Act that was passed in the Riigikogu today, detained persons and persons taken to recover from intoxication can also be detained in prisons.

The main purpose of the Act on Amendments to the Imprisonment Act and Amendments to Other Associated Acts (transfer of the tasks of detention) (275 SE), initiated by the Government, is to create the possibility to also detain the detained persons punished by arrest, the persons detained for a short term (for 48 hours) and the persons taken to be delivered from intoxication in regional prisons, in addition to convicted offenders and persons held in custody. Prisons will not take over the buildings currently used by houses of detention.

As custodial institutions with similar tasks are operating in Tartu and Jõhvi, under the Act, to save on costs and so that the institutions could focus on their main activities, the tasks of Tartu detention house are transferred to Tartu Prison and the tasks of Jõhvi detention house are transferred to Viru Prison. At the same time, the necessary expenses are transferred from the budget of the Police and Border Guard Administration to the budget of the area of government of the Ministry of Justice.

56 members of the Riigikogu were in favour of passing the Act and 17 voted against.

The Bill on Amendments to the Code of Enforcement Procedure and the Bailiffs Act and Amendments to Other Associated Acts (291 SE), initiated by the Government, will amend the current model for distributing the claims of public authorities so that, similarly to private claim owners, owners of public law claims will be able to choose bailiffs for themselves.

The Bill will also amend the provisions on bailiffs’ fees. The bailiff’s principal fee will be lowered to 50 per cent of the fee rate where the debtor fulfils a claim on the basis of a payment schedule and the payment schedule is entered into within the time limit granted for voluntary compliance with the claim. For example, in the event of a claim of up to 1,000 euro, the bailiff’s principal fee is 225 to which VAT is added, i.e. 270 euro in total. Under the Bill, in the event of a claim of 1,000 euro, the debtor will have to pay the bailiff’s principal fee in an amount of 112.50 euro, 135 euro with VAT included. The lower fee should motivate debtors to look for solutions.

According to explanation, the current bailiffs system has been experiencing operational difficulties for several years due to decreasing revenues. Therefore, practice is inconsistent and some bailiffs are unable to ensure the rights of parties to proceedings. According to the Bill, the state will begin to pay a fee to bailiffs for collecting monthly maintenance. Covering the costs involved in proceedings is the debtor’s obligation, and collecting maintenance is an unprofitable activity for bailiffs, as a bailiff can ask a fee of 292 euro just once, on the initiation of an enforcement matter, for compulsory enforcement proceedings that can last for 18 years or more. According to the Bill, the amount of the fee paid by the state for collecting maintenance will be up to 100 euro in a calendar year for an enforcement matter. The estimated budget cost per year will be 0.5 million euro.

The Bill on Amendments to the Chemicals Act and Other Acts (296 SE), initiated by the Government, will implement the requirements of the relevant European Union Regulation that harmonises the rules concerning the making available, introduction, possession and use of substances or mixtures that could be misused for the illicit manufacture of explosives. The aim of the regulation is to limit the availability of such substances to members of the general public, and to ensure the appropriate reporting of suspicious transactions throughout the supply chain.

The main purpose of the EU Regulation is to ensure a better and more uniform implementation of the requirements in Member States. This is taken to mean equal treatment of economic operators that operate in the sector and the free movement of explosives precursors in the internal market, including through e-commerce. In addition, it is intended to ensure that explosives precursors are used for the intended purposes.

For more effective implementation of the requirements for explosives precursors, according to the Regulation, economic operators, professional users and online marketplaces will have to inform the Police and Border Guard Board of suspicious transactions. This will apply in the case when they make explosives precursors available to the general public. Stricter requirements have also been established for the background check of persons who wish to acquire precursors.

The purpose of EELIS that will be established as an independent database will be to collect in a systematised manner and to ensure public availability of data on spatial objects related to the environment. The data of EELIS will be disclosed in the environmental portal. Since the existing solution for EELIS has become technologically outdated, the development of a new EELIS has also been started alongside with the Act.

The Convention obligates the registered owner of a ship registered in a State Party to maintain sufficient insurance or other financial security to cover possible pollution damage caused by hazardous and noxious substances according to the limits in place.

The convention also establishes a fund (HNS Fund) with the aim of providing compensation for the damage exceeding the limits of the insurance of the registered owner of a ship carrying hazardous and noxious substances. The resources for the compensation for damage are made up of the contributions to the HNS Fund. Companies receiving by sea the hazardous and noxious substances covered by the convention additionally have a reporting obligation and make contributions to the Fund on the basis of a relevant decision of the Assembly of the Fund and an invoice issued by the Fund. Contributions to the HNS Fund are made by persons who were the receivers of contributing goods in the State in the preceding calendar year. The HNS Convention obligates the owner of a ship to hold insurance or other financial security and a certificate certifying it. 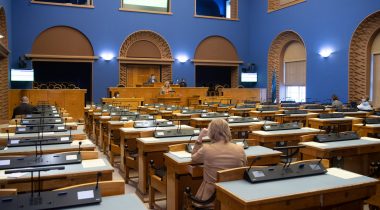