At today’s sitting, the Riigikogu passed the Resolution that appoints member of the Legal Affairs Committee Urve Tiidus as a member of the Joint Parliamentary Scrutiny Group monitoring the activities of the European Union Agency for Law Enforcement Cooperation (Europol).

69 members of the Riigikogu voted for the Resolution of the Riigikogu “Appointment of a Member to the Joint Parliamentary Scrutiny Group Monitoring the Activities of the European Union Agency for Law Enforcement Cooperation” (405 OE), submitted by the Legal Affairs committee. One member was against and there were two abstentions.

The Veterinary Bill (384 SE), initiated by the Government, has been drafted due to the need to implement a directly applicable regulation of the European Parliament and of the Council on transmissible animal diseases. The current national legislation concerning animal health will be consolidated into a single Veterinary Act. The aim is to consolidate, harmonise and update the sectoral law, to implement the EU Animal Health Law and other directly applicable EU Regulations in the veterinary sector, and to formulate the provisions, implementing procedures and provisions delegating authority that remain within the competence of EU Member States and that are necessary to set out the requirements more precisely.

The new Act will help ensure better legal clarity for operators and consistency of Estonian legislation with EU legislation.

The Riigikogu did not pass an Act again without amendments

The Act on Amendments to the Collective Agreements Act and Other Acts (383 UA), which the President of the Republic had refused to proclaim, intended to bring the regulation of extending a term or condition of a collective agreement into compliance with the freedom of enterprise which is protected by the Constitution, at the same time ensuring a capacity for social partnership and collective involvement. The regulation of extension concerns collective agreements that are entered into between employers and federations or confederations of trade unions.

The compensations to officials who are unlawfully released from service also increase. More specifically, this concerns an official who is pregnant, who has the right to pregnancy and maternity leave, is raising a child under seven years of age or who has been elected a representative of officials and who is released from service unlawfully. Until now, the amount of the compensation has been six months’ average remuneration, but according to an amendment, the employer will pay compensation to the extent of the 12 months’ average remuneration of the employee to the employee.

The third major amendment concerns trustees and, once the Act enters into force, if there are two or more trustees, the employer will have to enable all trustees to perform the duties of trustee during the working time to the extent of the time prescribed for at least two trustees.

With the amendments, among other things, the duration of the payment of the unemployment insurance benefit and the unemployment allowance will be temporarily extended by 60 calendar days in the case when the registered unemployment rate rises above 8.5 per cent in Estonia.

The Riigikogu had passed the Act on 13 September. The President of the Republic had decided to not to proclaim the Act on account of breach of the rules of procedure. According to the President, it had been incorrect to omit the deadline for entry into force from the text of the Bill after the second reading, because that was not a technical amendment, but changed the content of the text. 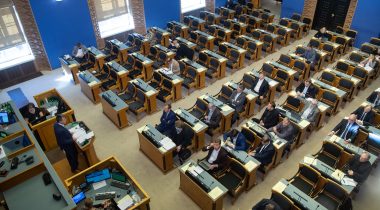