At today’s sitting, the Riigikogu discussed the overview of the civil service report of 2019 by Jaak Aab, Minister of Public Administration.

The report focuses in particular on civil service, that is, civil servants of state and local government authorities, but it also gives an overview of the whole public sector and government sector. The personnel statistics covers, among other things, the number of employees, the labour costs, and the indicators of recruitment, assessment and turnorver as well as composition of staff. In addition, it gives an overview of the training and development activities, ethics and the legal framework of the Civil Service Act.

Last year, state and local government authorities employed 27,628 civil servants, which accounted for 4.2 per cent of the total employment in Estonia. „In agencies, reorganisation of the work of various sectors was continued, in order to provide a better public service both digitally and in direct communication,” Jaak Aab said.

The average age of civil servants remained at 43.5 years, but the average age is on the rise. There are slightly more women than men, while there are more younger men in special services.

Aab explained the future perspectives. “With our team in the area of government of the Minister of Public Administration, we are looking for new opportunities to optimise governance and activities, on the one hand, and to use the taxpayers’ money most effectively for the functioning of the state. However, at the same time, we must not back down on quality and the quality of services, but we need to improve them even more,” Aab said. He continues to attach importance to the development of e-governance and wider use of information technology solutions in the provision of public services. Undoubtedly, we will also need to take into account the needs of developing e-governance when preparing for the new European Union 2021+ financial period. “The state needs to be smarter and more modern, and it is possible to automate many services. Then the need to communicate with state authorities for bureaucratic operations would be reduced for citizens, undertakings as well as local governments,” Aab said. “Civil service must however be able to keep abreast of global technology trends and to get used to the ever-increasing flexibility in the ways of working. Teleworking has come to stay. The corona crisis also showed this.”

Aab said that we also needed to continue moving state-salaried jobs out of the capital. “We need to value and appreciate the people who serve our country. We need to recruit the best experts in their fields to civil service and to remunerate and train them properly. The state and local governments need to develop and become more up to date as employers,” the minister noted.

The Minister of Social Affairs Tanel Kiik replied to the interpellation concerning the situation of children with chronic diseases (No 39), submitted by members of the Riigikogu Helmen Kütt, Jaak Juske, Heljo Pikhof, Jevgeni Ossinovski, Riina Sikkut, Indrek Saar and Ivari Padar on 18 June.

During the open microphone, Urmas Reitelmann took the floor. 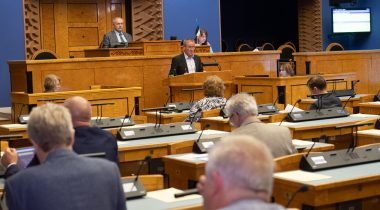