At today’s sitting, the Riigikogu passed the Act that extends the period of the restriction on access to the information on the manner of the processing of the data of the police database and the technological solutions and security measures of the database.

52 members of the Riigikogu were in favour of passing the Act and 17 voted against.

The purpose of the Bill on Amendments to the State Export Guarantees Act (423 SE) , initiated by the Government, is to create opportunities to take better account of the needs of Estonian exporters in the provision of credit insurance services guaranteed by state export guarantees and thereby also to encourage export. The motions to amend the State Export Guarantees Act can be divided in two. The majority of the amendments are necessary to create the opportunity to grant state export guarantees also under the credit insurance contracts for short-term transactions that specify an insured person other than the guarantee holder. In addition, the amount of state export guarantees valid at the same time will be increased from the current 191,734,949 euro to 400,000,000 euro.

According to the Bill on Amendments to the Maritime Safety Act (470 SE), initiated by the Government, documents proving qualifications issued in EU Member States and third countries will begin to be recognised on vessels operating in Estonian inland waters. The Bill will transpose a relevant EU directive harmonising the requirements for the training and professional qualifications of crew members working on inland waterway vessels. Diplomas and professional certificates valid nationally will continue to be issued pursuant to the current procedure as no transportation of goods is carried out on Estonian navigable inland waterways. Nor does Estonia have inland waterways that would allow cross-border transport or passenger transport with another EU Member State. The directive does not apply to the activities of leisure, sports, fishing, research and the performance of public administration functions.

The Bill will also update the health protection, including catering, requirements in place for preschool child care institutions, schools and social service providers. Among other things, the role of head of school in creating an environment encouraging healthy eating will be increased, and the heads of schools will be given the task to establish the requirements for and restrictions on the food offered for sale in educational institutions. The Bill will also amend the Social Welfare Act in order that it would be unambiguously understandable to which social services the health protection requirements established under the Public Health Act apply.

The Bill will prohibit the provision of the tanning and tattooing service to under 18-year-olds as well as update the requirements in place for other beauty and personal services. According to the explanatory memorandum, the WHO includes tanning devices in its list of group 1 carcinogens, which means that their connection to developing cancer has been scientifically proven. Tattooing also entails several health risks that arise from the dyes used in tattooing.

The Bill will also amend the Advertising Act and the Consumer Protection Act in order to extend the supervision competence of the Health Board and to give the Board the right and obligation to exercise supervision over the commercial practices relating to products and services, including the legitimacy of advertising. The Bill will also update the maximum fine and penalty payment rates in order that they would be sufficiently effective.

The Estonian Conservative People’s Party Faction and the Faction Isamaa moved to reject the Bill at the first reading. 28 members of the Riigikogu were in favour of the motion and 49 were against.

The Bill on Amendments to the Road Transport Act and Amendments to Other Associated Acts (490 SE), initiated by the Government, will bring the Road Transport Act, the Working Conditions of Employees Posted to Estonia Act and other Acts into conformity with the directives and directly applicable regulations of the European Union road package. The aim of the road package is to ensure adequate working conditions and social protection for drivers and the conditions for fair competition for road transport operators. 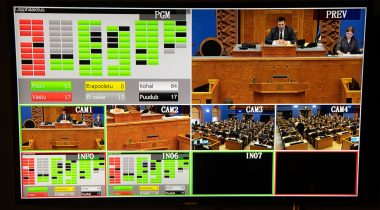