The Act passed at today’s remote attendance sitting of the Riigikogu allows the Court en banc to be postponed for good reason and to be held partially or fully electronically.

Under the current Act, the Court en banc has been convened every year on the second Friday of February, without exceptions.

Under the Act on Amendments to the Courts Act (298 SE), initiated by the Constitutional Committee, in the Court en banc, voting and elections may be held by ballot paper, electronically, in written form or in any other manner provided for in the procedure of the Court en banc.

The amendments passed today also provide that the term of office of members of local government bodies who are judges elected by the Court en banc extends for as long as the following Court en banc appoints new members to replace them.

84 members of the Riigikogu were in favour of passing the Act. The Act enters into force on 8 February.

The Bill on Amendments to the Traffic Act and the Road Transport Act and Amendments to Other Associated Acts (299 SE) will create a legal basis for checking the special systems of motor vehicles and their trailers. Considering the rapid technological development and the potential need to respond flexibly to the implementation of new technologies, the Bill will establish a general framework for checking special systems and for the bodies engaged in the checking. In particular, at present this concerns fuel tanks of the vehicles running on natural gas. The aim of the innovation is to ensure the safety of vehicles using compressed natural gas and liquefied natural gas as fuel.

According to the plan, starting from 2021, vehicles that use natural gas will have to begin to undergo mandatory regular checks where the conformity of the fuel tanks of such vehicles will be checked.

At present, the natural gas tanks of vehicles are mostly checked at dealerships whose employees have undergone relevant trainings and do the checking according to the manufacturer’s guidelines, which roadworthiness testers cannot always readily access. 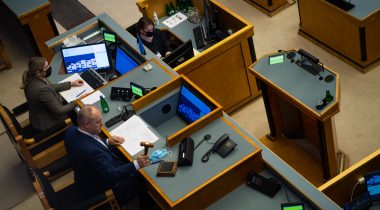