The Resolution passed in the Riigikogu today allows to contribute with up to five servicemen to the maritime security operation “Sentinel”.

Under the Resolution of the Riigikogu “The Use of the Defence Forces in the Fulfilment of the International Commitments of the Estonian State in Operation ‘Sentinel’ of the International Maritime Security Construct” (211 OE), initiated by the Government, the mandate will be in force until 31 December 2021.

In summer 2019, the United States of America launched an initiative to establish the International Maritime Security Construct IMSC, which aims to ensure the freedom of navigation and security of vessels in the Strait of Hormuz and to promote a rule-based international order. In order to achieve this, IMSC has launched the operation Sentinel in the Strait of Hormuz region.

The expenses of the participation in the operation will be covered from the budget of the area of government of the Ministry of Defence.

84 members of the Riigikogu were in favour of passing the Resolution.

The Bill on Amendments to the Public Holidays and Days of National Importance Act and the Estonian Flag Act (277 SE) (consolidated Bills 131 SE, 132 SE and 172 SE), initiated by the Government of the Republic, members of the Riigikogu Jüri Jaanson, Signe Kivi, Signe Riisalo, Toomas Kivimägi, Mart Võrklaev, Annely Akkermann, Kaja Kallas, Liina Kersna, Vilja Toomast, Yoko Alender, Andrus Seeme and Andres Sutt and the Social Democratic Party Faction, will amend the Public Holidays and Days of National Importance Act by including the Children’s Day, celebrated on 1 June, in the list of days of national importance. The list of flag days set out in the Estonian Flag Act will also be amended by adding the Children’s Day and the Grandparents’ Day. The Grandparents’ Day is already now celebrated as a day of national importance in Estonia on the second Sunday of September every year, but not as a flag day.

One Bill passed the first reading

Under the Bill on Amendments to the Income Tax Act (213 SE), initiated by the Social Democratic Party Faction, sole proprietors and natural persons may additionally deduct up to 5,000 euro, instead of the current 2,877 euro, during a period of taxation from their income derived from the sale of self-produced agricultural products after the deductions allowed have been made.

The explanatory memorandum notes that the tax incentive established for private forest owners will need to extend analogously to Estonian farmers as well.

The Riigikogu rejected a draft Resolution at the first reading 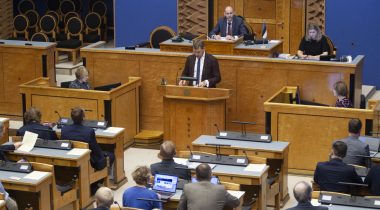