At today’s remote-participation sitting of the Riigikogu, Prime Minister Kaja Kallas gave an overview of the activities of the Government in implementing the European Union policy. Chairman of the European Union Affairs Committee Siim Kallas also made a report.

In her speech, Prime Minister Kaja Kallas said that Estonia and the European Union were directly interconnected in their development. “If Europe is strong, Estonia is strong as well, and vice versa,” she said.

“Estonia is consistently standing for European values and is working to ensure that the European Union’s voice in the world is influential and unified. It is important to Estonian people and businesses that Estonia stands for the four fundamental freedoms and the internal market of the European Union and continues to stand for the fifth fundamental freedom, the free movement of data, because data make up the core of the twin transition. Estonia supports an ambitious digital and green transition. Attention should also be paid to the social aspects of the transition so that, in the midst of it all, we would not forget the people and would not leave anyone behind or run over anyone while carrying out the changes,” Kallas said. “The European Union is and will remain above all a guarantee of peace and security. For me, the most important keywords for the forthcoming period are trust and reliability.”

When speaking of the pressure on the European Union borders, the Prime Minister said that Poland, Lithuania and Latvia were defending the border of Europe. “The European Union cannot submit to the blackmail of a dictator and the hybrid attack must be stopped decisively. Europe must act as one here, and Belarus must let the people, who are being used as weapons, to return to their countries of origin,” Kallas emphasised. “The use of migration as a weapon in both south and east has made the European Union finally to reassess the need regarding common border standards and investments in its external border.”

The Prime Minister also touched upon the issue of green transition and spoke of the development and role of digital technology as well as energy. “We are developing the Gulf of Riga wind farm in Estonian-Latvian cooperation and in a longer-term perspective we wish to see both an electricity network encompassing the Baltic Sea countries and a pan-European hydrogen network,” Kallas said, looking into the future.

In the Prime Minister’s words, the European Union is just as active as we want it to be and Estonia is committed to ensuring that the EU is a strong, developing and growing organism, and Estonia is its influential member.

Kallas pointed out that Europe was facing several challenges and emphasised that addressing those challenges required a joint effort of Member States.

The Chairman of the European Union Affairs Committee spoke of ensuring European security. “The Schengen system is a main pillar of European security. On the one hand, it means a large set of benefits – the enabling of free movement of people and goods. During the pandemic, this system was badly damaged,” Kallas said. “On the basis of the experience from the COVID-19 pandemic, the European Commission is planning to submit a new proposal to amend the Schengen Borders Code by the end of this year.”

In Kallas’s words, currently the main challenge for European security is illegal immigration and a hybrid attack from the east. He noted that enhancing the cooperation between international information collections helps both strengthen the Schengen system and fight illegal immigration. “Let us add here more effective protection of external borders in cooperation of the Member States and extending the possibilities of the border guard agency Frontex,” Kallas said. He also underlined the importance of cybersecurity.

When speaking of the importance of the digital sector, Kallas said that it provided both opportunities and challenges. In his words, the digital certificate that has been quickly established at Union level and has been put into operation successfully is an excellent example of cooperation between Member States. “The European Commission submitted the legislative proposal in March and already three months later the certificate was in use. It has been a real success story, and with its help we have regained many of our freedoms within the Union,” Kallas noted. “The format established is becoming a success globally as well by now. More than 600 million certificates have been issued already. Besides the European Union, 49 countries on four continents are participating in the system, and dozens more have submitted a relevant application.”

In his speech, the chairman of the committee also focused on the situation of the European Union’s finances. “By October this year, inflation in the euro area had risen to four per cent. We together with many other countries have survived much higher inflations in the past, but this is still worryingly higher than the two per cent prescribed to the euro area by the Stability and Growth Pact,” Kallas said. He noted that, in simple terms, it could be said that 15.2 trillion euro was circulating in the European economy. He added that, during the pandemic, a lot of money had been put into circulation to mitigate the crisis. “The budget support measures have increased the deficit and the debt level in all Member States. In my view, it is important to stick to the agreed goal of sustainable public finances and to return to the budget rules in the forthcoming years,” Kallas underlined.

In his speech, Kallas also touched on achieving the European climate target and the Conference on the Future of Europe. The European Union Affairs Committee is participating in the plenary meetings of the Conference with a four-member delegation.

A draft Resolution was dropped from the proceedings

The deliberation of a draft Resolution was adjourned

The deliberation of the Draft Resolution of the Riigikogu “Making a Proposal to the Government of the Republic (428 OE), submitted by the Social Democratic Party Faction, was adjourned due to the end of the working hours of the sitting. The draft Resolution is intended to make a proposal to the Government to compensate to Elering Ltd the costs of the payment of the renewable energy charge for 2021 to the full extent in order that it would be possible to temporarily release all electricity consumers from the renewable energy charge.

The proceedings of the Bill will continue at tomorrow’s sitting. 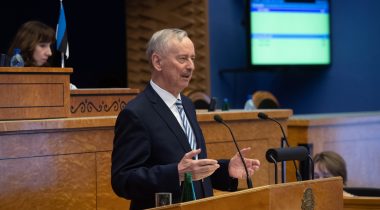