The Bill on Amendments to the Electronic Communications Act (138 SE), initiated by the National Defence Committee, will enable the Government to establish an information and authorisation requirement regarding the technology used in communication networks, in order to thereby ensure a high level of security of communication networks.

The explanatory memorandum to the Bill notes that, with a view to ensuring the quality of networks, to minimising the impact of cyber-attacks and to preventing political manipulations, it will have to be ensured that the establishment of communication networks and the provision of communications services by means thereof is effected with the help of secure technology and by reliable partners.

During the second reading, on the motion of the lead committee, an amendment arising from an opinion of the Government was incorporated into the Bill. In the Bill, coordination proceedings were replaced with information and authorisation proceedings. The Bill was amended by adding a clause according to which, in order to ensure national security, the Government may establish, by a regulation, an obligation for communications undertakings to inform of the hard- and software used in their communications networks and to apply for an authorisation to use the hard-and software of a network.

The amendments proposed in the Bill on Amendments to the Rescue Act and the Weapons Act (128 SE), initiated by the Government, are linked to the launch of the crisis information service, the involvement of volunteer rescuers, the tasks of the Rescue Board, and the specification of the Weapons Act.

The amendment will create a legal basis for the Rescue Board to process the causes of fires, and legal clarity about the content and activities of prevention work. In addition, the requirements for marking the locations for blasting explosives upon explosive ordnance disposal will be provided for, and the supply of food and drinking water to all people engaged in rescue work will be ensured.

Under the Bill, the Weapons Act will also be specified, and explosive ordnance specialists of the Explosive Ordnance Centre of the Rescue Board will be granted the right to carry and use firearms for self-defence.

During the second reading, amendments were incorporated to amend the classification of weapons. It is provided that the data of the weapons belonging to weapons collections of museums will not need to be entered in the Register of Service and Civilian Weapons. The requirement that a person may acquire, own and possess a sporting firearm only if he or she is a member of a shooting sports organisation or a shooting sports club will be restored.

If the Act is passed, it will enter into force on 15 May. By way of exception, clauses 2 and 4 concerning the amendment of the Weapons Act would enter into force retroactively as of 1 March.

Due to the end of the working hours of the sitting, the second reading of the Bill on Amendments to the Assistant Police Officer Act and Other Acts (measures related to the spread of the SARS-CoV-2 virus that causes the COVID-19 disease) (170 SE), initiated by the Government, was adjourned. The deliberation of the Bill will continue at Wednesday’s sitting. 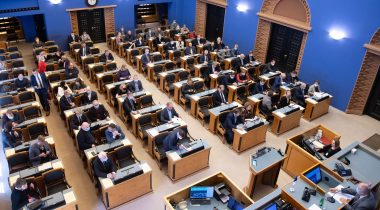